Land for the people now! 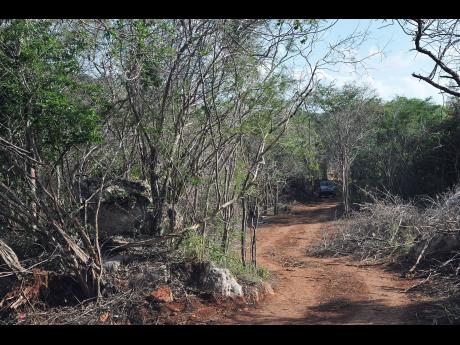 Norman Grindley
A section of the illegal 'development' in Dallas Mountain in which roads have been freshly cut. 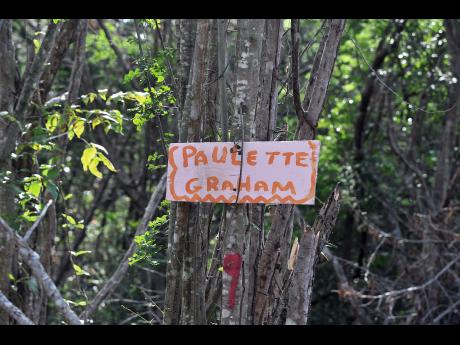 Norman Grindley
Land for sale in the hills of Bedward Gardens, Dallas Mountain. A Paulette Graham has nailed up a sign that this lot is hers. 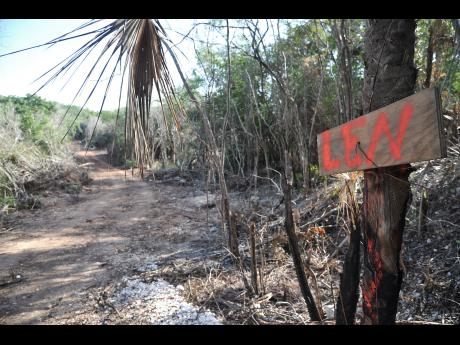 Something is happening in the hills of East Rural St Andrew! It could be big! I hope it gets really big! And it's not Juliet Holness' late candidacy for the JLP for the constituency.

I'm glad that Mrs Holness' candidacy didn't crowd out the front page of The Gleaner last Thursday, which led with the 'Illegal land grab' news story.

Some benevolent person has been cutting up and selling government lands in Dallas Mountain and the police have now moved in to stop it with one of their heaviest units, the Counter-Terrorism and Organised Crime Investigation (C-TOC) Unit. My, my! We don't get this sort of response with squatting on private lands.

The man behind the 'political land for the poor' scheme hails from the Bedward Gardens Providence Society based in August Town. There used to be many of these things helping poor people to survive largely through pooling their mickle to make a muckle where the State had abandoned them. The expansion of government provision of services and the sheer modernisation of economic relations have led to a mass extinction of provident societies. I didn't even know that this one in Bedward Gardens was in existence. But the Government, since Emancipation, has never ever deployed the land resources of the State to satisfy the land hunger of the people.

The provident society man defends the scheme he leads saying, "Poor people need land, and anywhere you can let a man get a square fi put him and him family head fi di future, that man will be thankful. We affi try grant the access to the people through dat."

Some 500 lots have apparently already been committed from all social classes, including teachers, police officers and soldiers, with the intention to put 'poor people' on lands and have them regularised later. Land titling in Jamaica has been an enormous joke. Hundreds of thousands of parcels of land exist without titles, and when a couple hundred are done each year, the Government congratulates itself everlastingly.

Juliet Holness comes to East Rural St Andrew as a real-estate professional and the principal builder of a Big House, which she shares with her husband, Andrew. She should understand the people's old and deep need for land and house. Who to tell, the Holnesses may share Gordon House and Jamaica House.

Mrs Holness goes up against Senator Imani Duncan Price of the People's National Party (PNP) for the East Rural St Andrew seat. It's a pity that both of these fine, intelligent and professionally accomplished young women can't win. They could both make fine contributors to the legislature in the Lower House and to a future Cabinet, especially if they can shake off some of the excessive party loyalty and old politics which have so hurt good governance in this country.

Imani can be returned to the Senate, where she has been making strong contributions, but Andrew Holness would not likely dare appoint his own wife, however capable as a Jamaican woman, to the Senate.

It's election time. Never mind the draw-brakes no-go decision of the prime minister for December polls. It couldn't be a better time for the land issue to buss. The junior minister for housing, Dr Morais Guy, has called in the police, saying the State has sanctioned no land-distribution programme in the area. The councillor for the division in which Dallas Mountain falls has stopped the project. The outgoing member of parliamnet, Damion Crawford, has apparently washed his hands of the affair.

The provident society man leading said, "A wi did a deal with it, through the Ministry of Housing, but we get to find out seh we are ahead of the minister, so we affi stop." I eagerly await the outcome of the C-TOC investigations! There is illegality, and there is illegality. The people, in many situations, have found themselves ahead of their Government. Certainly in the matter of access to land since 1838.

I pull P.M. Sherlock's West Indian Nations a New History off my shelf and turn to a much-read chapter, 'A 'Ground' of my Own', titled in Sherlock's over-anglicised Jamiekan.

"The struggle of the blacks for land, 'my own piece of ground', was part of his struggle for freedom," the chapter opens. "Land meant ownership, moving out of a position of being owned into one of possessing property, of controlling and managing it for one's own benefit." See those ownership name tag IDs nailed up in the bushes of Dallas Mountain that Gleaner photographer Norman Grindley captured for us and which accompanied the Daraine Luton story!

Around this time of year, after only two years after 'Full Free', the governor's despatch to the Colonial Office in London on December 14, 1840 was reporting that there had been a large increase in the number of proprietors of small freeholds from 2,014 to 7,848, an increase which had come almost entirely from purchase by former slaves. And these would have been only parcels with official registration for the governor's count.

Another four years later, in 1844, Baptist missionary William Knibb was reporting that some 16,000 families, with the help of the non-conformist missionaries, had established themselves on their own lands in 116 communities. This, despite the many obstacles set up in law and commerce by the Jamaica Assembly, the parish vestries (councils), and the landowners of the plantocracy.

The Paul Bogle-led Morant Bay Uprising had land at its centre. I was surprised to learn when I undertook commissioned research on the history of community development in Walkerswood, St Ann, to learn that landless labourers there had organised their own land hunger march to Moneague during the labour disturbances of 1938!

Veteran trade union activist and Labourite politician, Pearnel Charles, who himself hails from the Moneague area, was sounding an "Uprising alert!" via newspaper interview last Sunday, warning that when the people have taken too much for too long, they will explode into violent protests.

The Jamaica Five Year Independence Development Plan, 1963-1968, used the failure of the Government to use the historical turning point of October 1865 as a starting point to address the welfare of the people. Instead, "the Government turned its back on the people".

The Plan, which I have cited many times in this space, offered a timid and paltry Land Reform Programme and Housing Programme against the large overhang of needs which itself identified.

A land and housing revolution is long overdue. It has been due since Emancipation. I have long argued, and the land grab by land-hungry people in Dallas Mountain provides another opportunity to sound the trumpet, that a responsive and responsible government must use state lands to relieve the land hunger of the people.

The Government should also use the opportunity to realign the real-estate market to reality. I will get burnt, but the sale of lots from state lands should be strategically used to drive down real estate prices to realistic levels. Mark you, the pricing for Dallas Mountain lots is ridiculously low, if the Luton report is correct. Land can't be cheaper than a crop of stringy mangoes bearing on it!

A significant part of the housing dilemma in this country is because of the neck-lock grip profiteers who can manipulate policy have on the industry. Juliet Holness, as successful real-estate player and politician on a team chatting about prosperity for all and who could be the next parliamentary representative for Dallas Mountain in East Rural St Andrew, could find herself in the vice grip of contending forces over land and housing.

But in this election season, let's see how the present Government and its police force play this one, and how the Government and Opposition respond to the larger, longer, cross-country land-hunger issue. The people have been waiting, mostly patiently, for 177 years since 'full free', but have from time to time exploded over the matter.