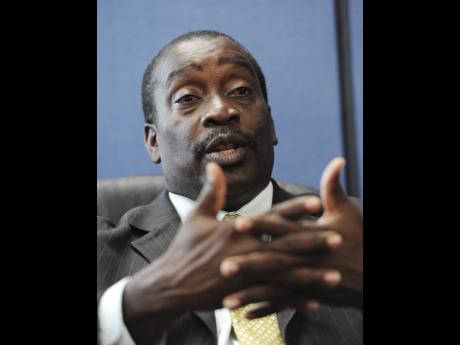 National Security Minister Robert Montague has been accused of using the "sensitive and contentious" issue of hanging as a diversionary tactic in the face of murders being committed in Jamaica, even as he promised to launch a multi-pillared attack on crime in the new legislative year

Opposite Spokesman on National Security Peter Bunting made the charge against the man who succeeded him in the aftermath of the February 25 polls.

Addressing the first day's sitting of the Standing Finance Committee of Parliament, examining the 2016-2017 Estimates of Expenditure, Montague disclosed, in response to queries from Bunting, that only one convicted person is currently on death row.

Bunting contended that this number was insignificant in comparison to persons killed in confrontations with the police.

As Bunting continued to press Montague, leader of government business in the House of Representatives, Derrick Smith, submitted that the issue was premature, as Montague had instructed state minister in his ministry, Pearnel Charles Jr, to pursue the issue.

It was then that Bunting suggested that gruesome murders had prompted the minister to "throw this out his diverting attention".

Montague said that on the change of administration, the new government had reason to review some of the existing policies and keep others.

The five pillars on which he said crime would be tackled included social development and enhanced rehabilitation.

"We will be going all out in the new year to roll out the new programme," said Montague.

Responding to Bunting's concern about what he described as net reduction of $800 million in the 2016-2017 Budget, Montague noted that the overall allocation had increased over last financial year's.

He, however, said that the removal of the Major Organised Crime and Anti-Corruption Agency (MOCA), to make it independent of the Jamaica Constabulary Force, had changed the budgetary picture.

When pressed, Montague sought permission to brief Bunting on the matter, as it has national-security implications.

It is now an elite agency focusing on tackling corruption in the public sector and bringing high-value criminal targets to justice.

MOCA is structured around a joint-staff concept working with international partners and bringing to bear the country's best intelligence assets, investigators, and prosecutors.

Montague said that the ministry was still in the programme of drafting policy on the acquisition of used vehicles, in response to Bunting who, in the past, has registered his opposition to such a move.