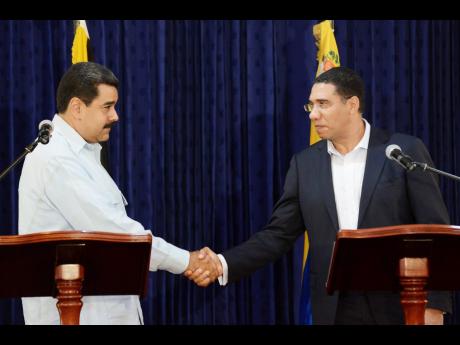 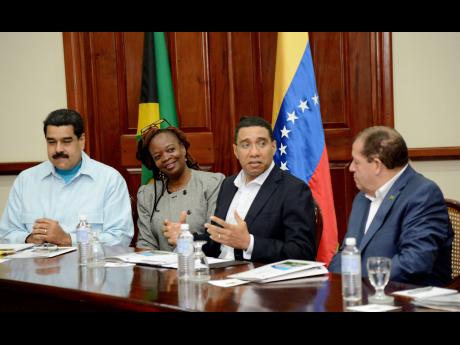 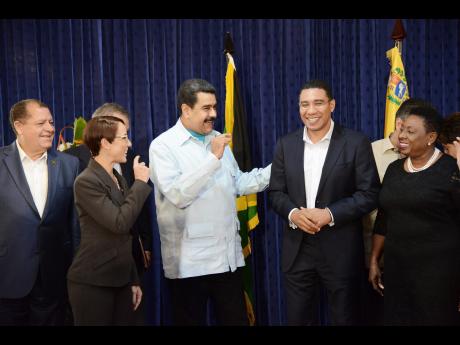 Despite a tense economic and social crisis enveloping his nation, Venezuelan President Nicolas Maduro yesterday came to an agreement with Prime Minister Andrew Holness to boost ties through the PetroCaribe oil-purchasing arrangement under which Jamaica and other Caribbean nations have benefited considerably over the past 10 years.

During a whirlwind working visit to the island, the embattled Venezuelan leader signalled that the alliance between his nation nation and many Caribbean states, to purchase oil on preferential payment conditions, has been given a new lease on life.

Though not outlined in detail, the plan for the decade-old PetroCaribe Agreement was among the main agenda items during Maduro's one-day working visit.

Although PetroCaribe agreed links with the Bolivarian Alliance for the Americas (ALBA) in 2013 - to go beyond oil and promote economic cooperation - there were concerns over the last year that the death of Maduro's predecessor as president, Hugo Chavez, would bring the curtains down on the arrangement.

But Maduro's pronouncement yesterday, during a joint press conference, put paid to the speculation while Prime Minister Andrew Holness promised that Jamaica would be the voice of fairness and balance in addressing the snowballing economic and political crisis in the South American state.

"We have been viewing closely, following with concern, the political and economic developments in Venezuela, and we wish for social and political peace to prevail for the greater good and welfare of all," Holness said.

Venezuela's economy has been teetering on the edge of collapse with widespread food shortages and inflation forecast to surpass 700 per cent.

Maduro had given himself decree powers to intervene in the economy and protect national sovereignty, claiming that the move was necessary to guard against the United States (US) meddling in the socialist country.

The Venezuelan president subsequently accused the opposition of working with the US to orchestrate a coup against him, and thousands of people were tear-gassed as police turned back an attempt to march to the electoral body.

Yesterday, Holness said that despite the challenges facing Venezuela, the PetroCaribe agreement was anything but faltering.

"I wish to convey appreciation to Venezuela for its continued support to Jamaica and its expressed commitment to the PetroCaribe initiative despite the serious economic challenges facing that country," he said.

Said Maduro: "The prime minister has made a very good summary of the issues that we discussed: to improve our relations in economics, trade, and energy, and also to strengthen the integration of our countries in the field of culture."

The Venezuelan leader added that the talks covered various matters and included an exchange of views on the situation in the Latin American region and the Caribbean.

Holness promised that Venezuela would not be abandoned by Jamaica, and Maduro vowed that his country would overcome as it has done in the past.

"We must continue to nurture relations of trust so that we can, through dialogue about all issues, find creative solutions, bearing in mind the very deep and effective relationship that has existed between our countries for decades," said Holness.

Maduro reiterated an announcement by Holness during a Jamaica House joint press briefing that trade between the two countries is to be accentuated under the PetroCaribe Agreement.

"We also discussed the need to strengthen arrangements under the PetroCaribe scheme, which has been extremely successful in strengthening the economic and energy status in the region," said Maduro.

"In today's world, there are huge economic threats against us and we might feel that uncertainty could prevail."

He continued: "However, we are fully convinced that in the last 10 years, PetroCaribe has clearly demonstrated that it is only together that we can achieve development and happiness for our people."

The two governments will give themselves three months to come to final decisions on the agreements.

1) To improve trade, especially through arrangements under the PetroCaribe Agreement. This initiative will be led by Audley Shaw, minister of finance and the public service.

2) An expedited agreement on the Refinery Upgrade Project, which is mutually considered to be imperative to the economic development of Jamaica.

3) Strengthening cultural ties with Venezuela, including through cooperation with Venezuela's El Sistema, a world-renowned youth orchestra and system of training youth in music.

Under PetroCaribe, member nations buy oil at market value and only pay a percentage of the cost up front, with the balance being paid over 25 years at one per cent interest.

Countries under the agreement are allowed to purchase 185,000 barrels of oil per day on these terms.