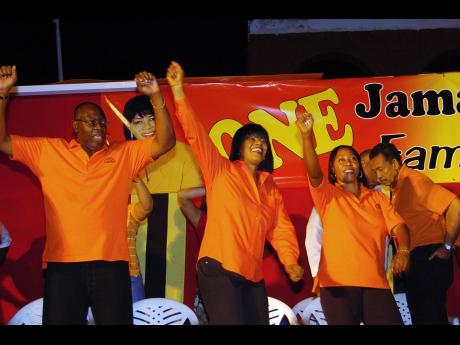 According to Ferguson, loyalty is critical to political longevity, but this should not be blind as it does not preclude Comrades from developing political independence in thought or expression.

"This is why I believe that when you enter politics, it is important that you have the option to be independent. Because there are things that are needed to be said and somebody has to say it.

"But, I believe that you must be loyal to your leader. And whatever I have to say, I say. I don't need anyone to tell the party leader that I have something to say. I can do it myself," Ferguson told The Sunday Gleaner.

Ferguson said he has had to talk straight to the PNP and the party's leader Portia Simpson Miller in the past.

The veteran politician who backed Dr Peter Phillips in his two failed bids to lead the PNP, said despite the bruising leadership challenge to Simpson Miller in 2008, he was the only person from the Phillips camp to be elected to a party officer post.

"You would well remember that night of 2008 I walked into the arena with a sea of Portia supporters, thousands, and I went in without fear, without security. I just walked straight into the arena. And I did an interview thereafter and I said that I can only be loyal to one leader at a time," said Ferguson.

"And it does not take away my right to support whomever I want to support. But I am not into undermining leadership, and it's not because I am afraid of leadership either. It's not born out of fear, it's born out of principle."

Ferguson has been a member of parliament for the last 23 years in the constituency of St Thomas Eastern and is the longest-serving vice-president in the PNP, both roles he plans to keep for some time.

"I have enjoyed it, because when you operate on principle, with clearly defined core values, when you are not a flip-flopper, today you are this, and tomorrow you are that, nobody will trust you, and no one can ever accuse me of that."

'Nobody cares' - Residents of Willowfield, St Thomas, believe they have been abandoned
'Give pensioners interim dividend of $1,000 a month'
Let me teach you how to win! - After six election victories, Ferguson offers classes to young Comrades
Fighting fit Fenton - Ferguson ready for battle to remain PNP VP!
More US jobs coming - American hospitality sector looking for 3,000 Jamaican workers