Good as GOLD - Two down, one to go 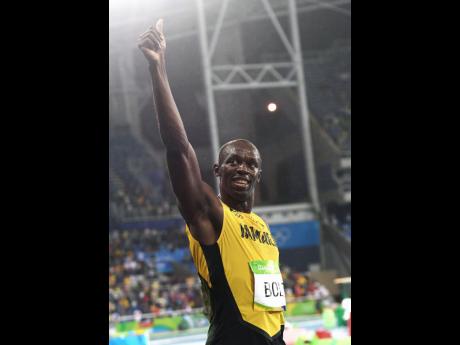 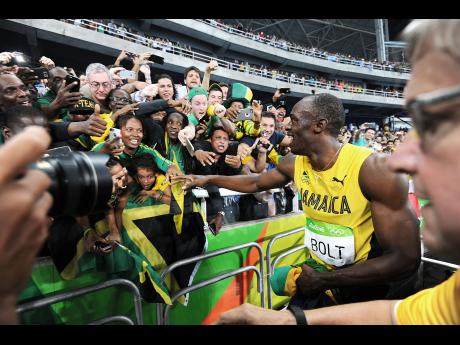 There will never be another like him, and as the Jamaican sprinter closed another chapter of a book coated in gold, he became the first in what, for him, was also a last.

In his final individual Olympic appearance, Usain Bolt crowned his legacy with a 19.78 win in the men's 200m final inside a packed Olympic Stadium.

It was his sixth straight gold and 23rd straight win in the 200m at a major championship, lifting his overall gold-medal tally to eight - one behind Carl Lewis. That's sure to annoy him, but he will get his chance to change that today in the 4x100m final.

Bolt was certainly in a good mood at the start - a samba here and a clear message to the TV cameras.

And that he was.

A brilliant start, a strong curve and a bustling sprint to the finish line, in truth, he was never threatened. The clock had become the focus. Like he has so many times on this stage, Bolt was running against time. He couldn't win that battle last night. There was a little rain before the start, but no lightning this time for the big Jamaican.

"I wanted to run faster. It would have helped if I had someone fast in front of me," said Bolt. "I wasn't happy with the time when I crossed the line, but I'm happy with the gold medal."

"I don't focus on all the talk about being a legend; I focus on what I need to do because without that, there would not be any Usain Bolt," said Bolt. "But when this moment comes, you are happy, and you are also relieved."

Bolt's win also means that Jamaica is the first country to have a man and woman sweep the 100m and 200m at the same Olympic.

So two down, one to go in his run to history.

Annsert Whyte could not join Danny McFarlane (2004) and Winthrop Graham (1992) as Jamaican Olympic medallists in the men's 400m hurdles in yesterday's final, but he was rightly pleased with yet another personal-best performance in the event - his third at these Games.

Whyte, who had earlier clocked 48.37 in the heats and 48.32 in the semi-finals - winning both, again took his all-time record down in the final, crossing the line in 48.07 seconds - the fourth-fastest time by a Jamaican, for his fifth-place finish.

"I did my best. I gave it my all. There is nothing more that I could have done," said Whyte after his race.

The event was won by American Kerron Clement, who posted a personal best 47.73, with second going to Boniface Tumuti (Kenya), 47.78, and Turkey's Yasmani Copello, 47.92, taking the bronze. The second to fourth-place finishers all ran national records in this event, as did the sixth-place finisher.

O'Dayne Richards became the second Jamaican after Dorian Scott to qualify for the men's shot put final with a best of 20.40m in the qualification round before a messy series in the final, which resulted in only two legal throws and mark of 20.64m, which left him in eighth position.

"I do not feel too disappointed. I had a rough year. God has been good to me," said Richards.

Ristananna Tracey, 54.15, and Leah Nugent, 54.45, posted personal-best times for their fifth- and sixth-place finishes in the women's 400m hurdles final, while Janieve Russell ran seventh in a time of 54.56.

The favourite, Dalilah Muhammad (USA, obliged to win the gold medal in 53.13, with Denmark's Sara Petersen, 53.55, taking the silver and another American, Ashley Spencer, 53.72, winning bronze.

The team of Jevaughn Minzie, Asafa Powell, Nickel Ashmeade and Kemar Bailey-Cole posted 37.94 to finish second in their heat behind Japan, 37.68.

Bolt and Yohan Blake are expected to be added to the team for the final, which starts at 10:35 p.m. (8:35 p.m. Jamaica time), most likely in place of Bailey-Cole and Minzie, with the Jamaicans looking to win their third straight Olympic 4x100m gold medal and their seventh consecutive gold at a major championship.

The women's team, which was made up of Simone Facey, Sashalee Forbes, Veronica Campbell-Brown and Shelly-Ann Fraser-Pryce won their heat in 41.79 and are the second-fastest team through to the 10:15 p.m. (8:15 p.m. Jamaica time) final, which is expected to feature Elaine Thompson and, possibly, Christania Williams.