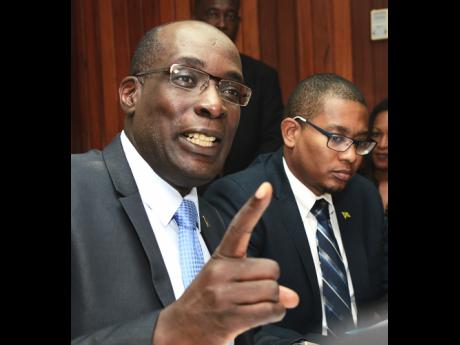 Ian Allen
Ruel Reid (left), minister of education, addressing members of the media at the ministry yesterday. Looking on is Floyd Green, minister of state in the Ministry of Education. 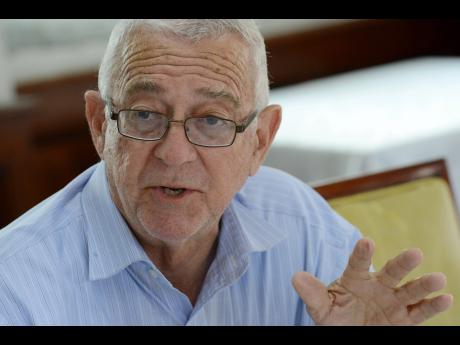 An intensified mathematics education programme that is aired on television is one of the short-term solutions that Ronald Thwaites, opposition spokesperson on education, has recommended as an avenue to address the stark decline that was seen in this year's sitting of the Caribbean Secondary Education Certificate (CSEC) mathematics examinations.

Minister of Education, Youth and Information Ruel Reid yesterday told journalists that there was a 14.3 percentage point decline in mathematics and a 6.2 percentage point increase in English language.

But Thwaites believes that this programme of specialised teaching via television should not be discounted. "For the short term, I hope this is something that would be considered, where we would have a trained teacher or teachers on air who would go through the syllabus. I believe this would provide an equal opportunity for all students to access quality teaching," he said.

"I also believe we have to revamp the way we teach the subject from the very start - the early-childhood level. We have a serious phobia when it comes to the subject and that has to be addressed," he said.

Reid said that the ministry has concluded that the inadequate number of appropriately trained teachers of the subject was the main factor in the decline.

"The decline in mathematics comes after three consecutive years of improvement in the performance of students in the examination. Previously, the ministry had seen improvement from 37.2 per cent in 2012 to 62 per cent attained in 2015," he said.

"Based on our 2013-2014 census, only 207 of the 1,784 mathematics teachers deployed in the secondary education system are fully qualified to teach mathematics to Grade 11. This means only 207 have, at least, a bachelor's degree in mathematics teaching," he said.

"It is estimated that 111 of these fully qualified teachers left the system in 2015. It is believed that many took up teaching opportunities overseas. Undoubtedly, this would have affected the preparation of a significant number of students," he continued.

"In addition, this loss would have had a significant impact on the ability of schools to maintain the standards of teaching and learning which would have been established, particularly, over the past four years. Finally, our schools would have had a challenge identifying adequate numbers of suitably trained teachers to replace those who left the system," Reid said.

He noted that the ministry, having recognised the impending challenge, is to develop the Mathematics, Science and Technical Vocational Education and Training (TVET) Teacher Initiative to increase the number of fully qualified mathematics teachers.

"Close to 230 students have been awarded scholarships to pursue courses in mathematics, science and TVET programmes. Of this number, 138 have been identified to pursue programmes in secondary mathematics education," he said