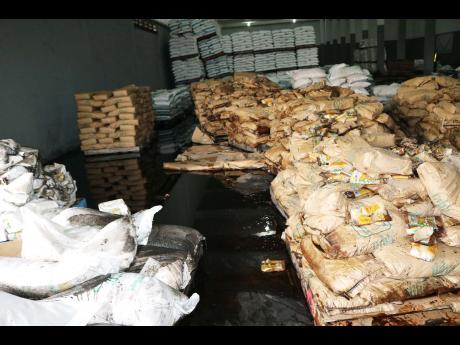 File
Some of the sugar stored in the Marcus Garvey Drive warehouse operated by Jamaica Cane Products Sales Limited, which was damaged by Friday’s flooding. 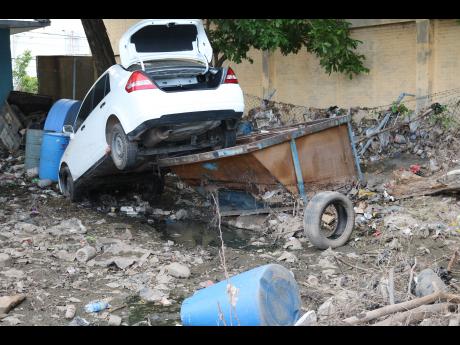 Christopher Serju
This car, with its rear end resting on a garbage skip at the Marcus Garvey Drive premises of the Fisheries Division, is evidence of the flooding that affected the area on Friday.
1
2

Public-health inspectors are slated to return to the sugar warehouse along Marcus Garvey Drive operated by Jamaica Cane Sales Products (JCPS) to continue their evaluation of the extent of the stock of the sweetener that was damaged by flood waters on Friday.

"I'm coming from the warehouse now. We are not in a position to give any numbers yet. We are sorting out, but there is a significant damage to sugar that was stored in there - all different types of sugar. So we are now looking at a significant loss there, plus equipment and so forth," Karl James, general manager of the JCPS, told The Gleaner yesterday.

Workers were busy trying to salvage sacks of sugar that were untouched by the waters from the nearby gully, the force of which broke down the perimeter fencing. James gave this explanation.

This is in reference to the extensive rehabilitation work being done by China Harbour Engineering Company, with the bridge in question located along a gully that runs between the property of the sugar warehouse and the fisheries division of the agriculture ministry, which also suffered great damage and losses.

At least five workers were trapped in the building after the gully overflowed and the water sent a section of the fence crashing to the ground, en route to flooding the warehouse.

In addition to salvaging sugar, workers were also putting out furniture to be dried, as mechanics tried to effect repairs to cars that were damaged by the flood.

Representatives from the JCPS's insurers also visited the warehouse, but it is not expected that even any preliminary estimate of the damage will be forthcoming before Wednesday.