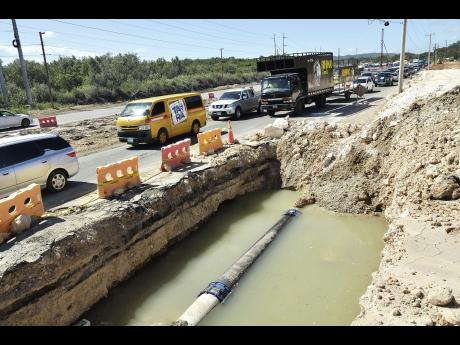 Norman Grindley
In this January file photo, a part of Mandela Highway in St Catherine was dug up to facilitate repairs to a broken National Water Commission main. However, the massive hole remained open for some time, reducing the road to single-lane traffic and causing a pile-up of motor vehicles heading into Kingston.

Carelessness by the National Water Commission (NWC) is causing the already debt-burdened state entity to spend millions of dollars more on projects it is implementing.

Auditor General Pamela Monroe Ellis raised the alarm about the NWC in a performance audit of the commission's contract and procurement management for capital projects, which was tabled in Parliament on Tuesday.

According to Monroe Ellis, poor scoping and delays in executing contracts led to time overrun and increased costs for the NWC in some instances, while poor coordination and inadequate monitoring of projects resulted in costly variations.

Among the foul-ups highlighted by the auditor general was one case where the NWC paid a contractor engaged to design and build two of the wastewater treatment plants US$4.27 million.

But the company had to fork out an additional US$726,594 (J$91.1 million) for modification of the layout and design, as well as additional work.

"NWC indicated that the variation was largely due to an expansion in the work scope arising from legislative changes in April 2013. However, given that the contract was signed in September 2015, twenty-nine months after the legislative changes, NWC had an opportunity to re-examine all bids and appropriately price the revised design and construction works, required by the legislation," said Monroe Ellis.

In another instance, the auditor general noted that the NWC did not commence work for the Santa Cruz Water Supply project until six years after signing the contract.

"Despite waiting two years for the approval of funding, NWC did not issue its order to commence works until four years after receipt of approval.

"The project commenced on July 1, 2015, and due to increases in rates for labour, material, and equipment, subsequent to the signing of the contract, NWC increased the contract sum by $15.7 million (71 per cent)," said Monroe Ellis.

Pamela Monroe Ellis, the auditor general, highlighted a case where the National Water Commission (NWC) entered into an emergency contract for an estimated cost of $745 million in November 2012 to address the unsanitary public-health condition and overflow of untreated sewerage within the communities of Majesty Garden, Seaview Gardens, and Riverton City in the Corporate Area.

"We expected that these factors would have been considered in the planning process to ensure smooth implementation of the contract to ensure value for money," argued Monroe Ellis.

She recommended that the NWC strengthen its scoping and implementing of contracts to identify critical elements for the successful implementation of projects and the achievement of contract objectives.

And the NWC should also monitor contracts throughout implementation to minimise losses from incomplete projects.