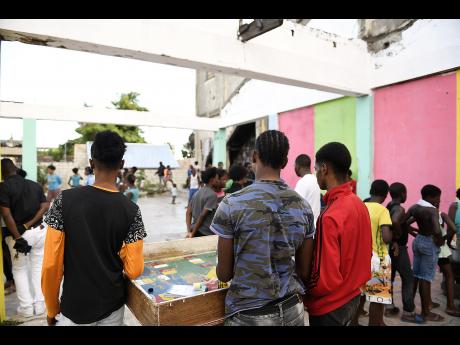 Gladstone Taylor
Residents of ‘Tel Aviv’ in central Kingston sharing their experiences during a Gleaner/RISE Life On the Corner with Unattached Youths forum in Rum Lane last Wednesday.

Bloody gang wars are something that residents of the central Kingston community known as 'Tel Aviv' have lived with for decades.

Either the long-running battle between thugs from the neighbouring community of South Side or internal conflicts, violent death has stalked the community, claiming several lives.

By the residents' check, more than 20 people have been killed by gangsters in recent years, but they say few of the killers would know the genesis of the battles they are fighting.

"This is a continued war over something the youths do not even know about. Dem no know how it start, dem not even know who started it and why," declared a resident of the community during a Gleaner/RISE Life Management On the Corner with Unattached Youths forum in Rum Lane last Wednesday.

"Them just grow up and decide say the war nah done because a that man kill them fada years earlier," added the resident.

"It is a generational curse," quipped another young man, as he charged that the initial dispute would have happened many years ago but the older residents spread the hate of an area or a group to the children as soon as they can understand, perpetuating the hate and mistrust that is so evident in communities like Rum Lane.

According to a resident who gave his name as 'Omi', the hate spread by the adults has led to the segregation of children along these lines.

"Dem beating segregation into the pickney dem head. Is dat a gwaan and it is not going to stop, especially as they are not being taught to forgive. So it continues, and, trust me, all 20 years from now we still going to have this problem," declared Omi.

He pointed to a number of contributing factors to this generational war, including too many teenage pregnancies in the community, the lack of proper parenting and the lack of government policies dealing with workable social-intervention programmes.

"Look around here; it's a disgrace how people live, but we cannot do any better because is so the system set up against some people. Don't get me wrong, I am not blaming the system really, but it has contributed," said Omi.

"The war thing, it's generational. It is war over a number of generations, and is like seh de youth dem can't even think fi dem self because they would do anything they are told. Like mindless zombies," declared one young female resident of Rum Lane.

She argued that the minds of the people need changing before any social intervention will be successful in the community.

While asking that her name be withheld, the young woman added that even while efforts are being made to transform the minds of the people, the community needs improvements in its physical infrastructure, training workshops and evening reading classes to help bring the residents together and change lives.

No age limit on education – 43-year-old mother of four heading back to school
Save the youths with music! - Southside wants a recording studio to occupy the minds of unattached youngsters
'Blame the parents!' - Without guidance, Tel Aviv children becoming 'shottas'
Motherless, jobless but not hopeless - Kimani searching for an opportunity
Crime college 'Tel Aviv' - After 20 arrests David now determined to shape a different destiny