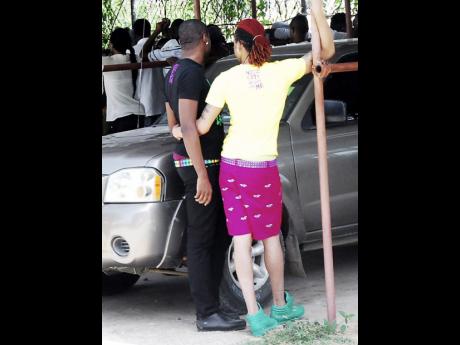 Contributed
A cross-dresser and another man look on as alleged lottery scammers were being rounded up during a police raid in Montego Bay, St James.

The United States Department of State has highlighted reports of serious human rights abuses against members of the lesbian, gay, bisexual and transgender (LGBT) community in Jamaica.

In its Country Report on Human Rights Practices for 2014, the US Department of State said non-governmental organisations continue to report serious human rights abuses, including assault with deadly weapons, "corrective rape" of women accused of being lesbians, arbitrary detention, mob attacks, stabbings, harassment of gay and lesbian patients by hospital and prison staff, and targeted shootings of such persons.

"Stigma and intimidation were likely factors in preventing victims from reporting incidents of discrimination in employment, occupation, and housing. Although individual police officers expressed sympathy for the plight of the LGBT community and worked to prevent and resolve instances of abuse, NGOs reported the police force in general did not recognise the extent and seriousness of bullying and violence directed against members of the LGBT community and failed to investigate such incidents," the report stated.

In addition, the 2014 human rights report said prison wardens held male inmates considered gay in a separate facility for their protection. "The method used for determining their sexual orientation was subjective and not regulated by the prison system, but inmates reportedly confirmed their sexual orientation for their own safety. There were reports of violence against gay inmates, perpetrated by the wardens and by other inmates, but few inmates sought recourse through the prison system," the report added.

According to the US report the most serious human rights issues were alleged unlawful security force killings; cases involving the violation of rights that were not resolved in a timely way; and poor prison and jail conditions, including abuse of detainees and prisoners and severe overcrowding.

It also highlighted human rights issues including an overburdened, under-resourced, and inefficient judicial system and frequent lengthy delays in trials; violence against and sexual abuse of children; violence and discrimination against women and trafficking in persons.

The US Department of State Report said the Jamaican government increased its efforts to investigate and punish members of the security forces who committed abuses. However, it said a lack of willing witnesses continued to plague the justice system and trials languished, resulting in a perception of impunity.