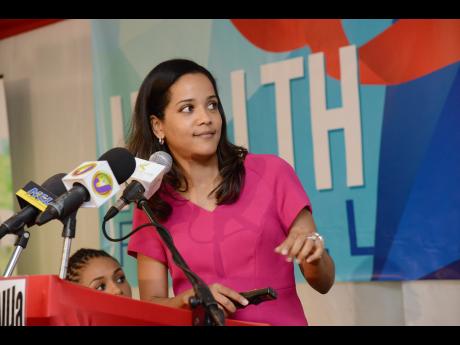 Adolescent males' vulnerability to the human immunodeficiency virus (HIV) has become a major concern for at least one official at the Ministry of Health, as a research undertaken by a project dubbed 'All In' showed that there are 658 females, between the ages 15 and 19, living with HIV and acquired immunodeficiency syndrome (AIDS), while there are 815 males the diseases.

According to Marion Scott, national coordinator for the 'All In' project which was undertaken by the health ministry in

collaboration with the United Nations Children's Emergency Fund, the numbers, "contradict the long-held belief that girls in that age group were four to five times at greater risk for HIV".

"Girls tend to be able to access health care not only because of their health-seeking behaviour, but in the event they become pregnant, they end up in a health facility.

"They benefit from a test which allows them to get to know their status. However, that's not the case for boys and so many of them would be undiagnosed and, therefore, are not accessing treatment," she said.

"For us at 'All In', one of the major wake-up calls for us was when we found that boys were at a significantly higher risk than girls.

In previous times, the Ministry of Health has always said it was the girls, but we looked at our testing and our surveillance systems and realise that more boys were in fact infected or at risk," she said.

According to her, many of the challenges that vulnerable

populations face is due to the lack of inclusiveness with the laws and policies.

"We have shown significant improvements in reducing deaths among adolescents. The challenge we have, however, is that unless we continue to get the support and do something about those policies and legislation that may be inhibiting access, then we may run into problems in keeping that downward trend," she lamented.

"There are also a number of issues that we face as it relates to key populations who are marginalised. The legal and policy environment can be 'disempowering' for both the service providers and the young people. We have social barriers to deal with which can prevents access," Scott said.

In the meantime, Pearnel Charles Jr, minister of state in the Ministry of National Security, said it was time for the Government and citizens to tackle the problems head-on.

"I'm here because I find it important for Jamaicans to come to the realisation that we have to confront the issues head-on. We have made some strides, especially as it relates to discrimination and access to treatment. However, despite all those gains, as a nation, we have to do an honest assessment and address the glaring gaps," he charged.