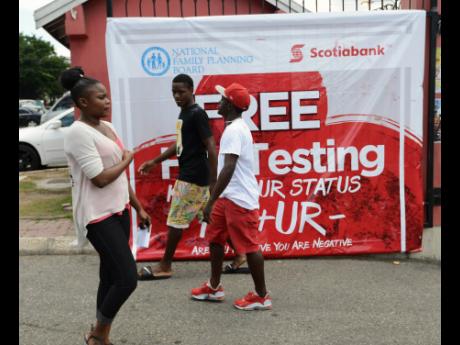 Ricardo Makyn
Members of the public walk by the entrance to the Oakland Entertainment Complex in Half Way Tree where free HIV testing was conducted recently. 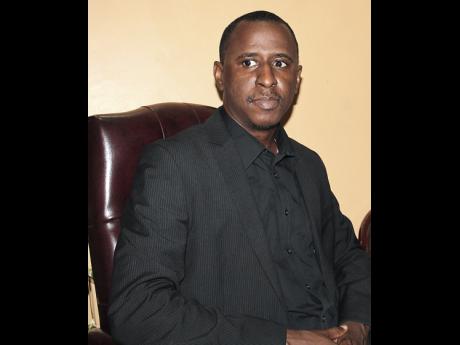 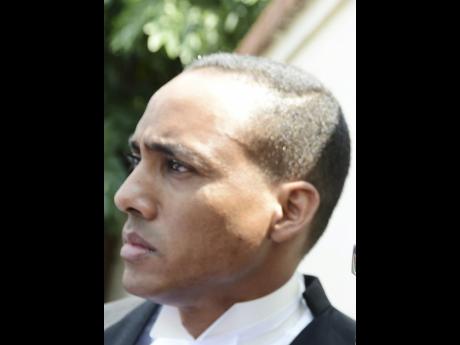 There are growing calls in local legal circles to implement laws to make it a criminal offence for persons to wilfully and knowingly spread the human immunodeficiency virus (HIV).

Although it is reported that Jamaica has an estimated 32,000 persons living with HIV, so far, no person has been charged and convicted of exposing another person to infection by engaging in unsafe sexual conduct.

"There is no clear law which makes it an offence," said attorney-at-law Chukwuemeka Cameron, as he argued that someone should take a case to court to test the law.

According to Cameron, if someone should be brave enough to take such a case to the courts it may open a floodgate.

"It is a new disease which came about after the enactment of the Offences Against the Person Act, and so this is a perfect example of the need for the law to change with new circumstances," agreed attorney-at-law Bert Samuels.

"We have kept abreast of the changes of computer technology to enhance commerce but we have failed to look at a problem that touches and concerns our health. Our Parliament is entrusted to pass laws for peace, order and good governance of the country, and must, as a matter of urgency, pass laws to punish those who knowingly pass a deadly disease," added Samuels.

The debate on the wilful and knowing spread of HIV was sparked recently as the Supreme Court had to decide, in an extradition case, whether the transmission of HIV by sexual relations is an offence in Jamaica.

The court ruled that charges could only be brought in cases where the victim was infected with the virus. But attorney-at-law Peter Champagnie has a different view.

Champagnie argues that there should be specific legislation to deal with offences committed knowingly by HIV-infected persons, as he disagreed with the court's ruling.

"Although a victim may not be infected by HIV from unprotected sex, I cannot understand why it could not be categorised as an attempt," said Champagnie.

According to Champagnie, the fact that a victim is not infected does not absolve the infected person of culpability.

"To my mind, he would have known of his status and was reckless as to whether or not the persons contracted the disease," said Champagnie.

Attorney-at-law Don Foote, who represented 47-year-old Jamaican, Alfred Flowers, had argued that he should not be extradited to Canada to face charges of aggravated sexual assault because there was no corresponding offence in Jamaica.

Flowers knew, since June 1996, that he was HIV-positive but he had unprotected sex with four women, including his wife who he married in 2002 without informing them of his status.

The women said if they knew he was HIV-positive, they would not have been intimate with him. Three of the women are now HIV-positive while the fourth is currently HIV-negative.

Director of state proceedings Althea Jarrett and senior deputy director of public prosecutions Jeremy Taylor could find no local case to use as a precedent, and had to rely on authorities from other jurisdictions to support their interpretation of the Offences Against the Person Act.

They relied on Section 22 of the act to oppose Flowers' contention that there was no corresponding offence in Jamaica.

"Whosoever shall unlawfully and maliciously wound or inflict grievous bodily harm upon any other person with or without any weapon or instrument, shall be guilty of a misdemeanour, and being convicted thereof, shall be liable to be imprisoned for a term not exceeding three years," the section reads.

The court comprising Justice Christine McDonald, Justice Sarah Thompson James, and Justice Kissock Laing, in agreeing that Flowers should be extradited to stand trial in respect of the three women who are now HIV-positive, said it was open for the court to find that a person who knows that he is infected with HIV and recklessly infects another may be guilty of inflicting grievous bodily harm contrary to Section 22 of the Offences Against the Person Act.

But the court made it clear that if the victim of unprotected sex with an HIV-positive person is not infected, then that person cannot bring any criminal charges.

The court found that there was a grave lacuna in the Jamaican law, and said further that it was unfair that Flowers would only have to answer to charges in respect of three of the four complainants.

In explaining why Flowers cannot be tried in relation to the complainant who is not infected, the court said, "The infection would be a necessary ingredient were the accused to be charged in Jamaica for the offence under Section 22 of the Offences Against the Person Act."

The Canadian HIV/AIDS Legal Network that has been opposing HIV criminalisation for some time. It argues that:

- Canada is no model when it comes to HIV criminalisation where it has become out of control. With more than 180 people charged to date, Canada has become one of the world leaders in criminalising people living with HIV, with serious implications for human rights and public health.

- UNAIDS, the Global Commission on HIV and the Law, and the UN Special Rapporteur on the right to health have all urged to limit HIV criminalisation to intentional transmission - which is far from being the case in Canada, where people can be convicted of extremely serious offence even if they had no intent to harm their partner, took precautions (used a condom or were on effective treatment) and did not transmit HIV.

"Countries may legitimately prosecute HIV transmission that was both actual and intentional, using general criminal law, but such prosecutions should be pursued with care and require a high standard of evidence and proof."