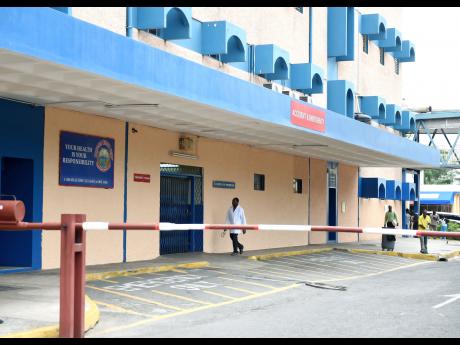 Several nurses based at the Kingston Public Hospital (KPH) yesterday continued to voice concerns over their safety following the suspension of a shuttle bus service that transports them from the hospital to the bus parks in downtown Kingston after hours.

According to one nurse, for the past three weeks, they have had to pay random hustlers to follow them to their bus stops or make their way alone on foot through some of the most volatile communities in west Kingston, where the hospital is located.

"Whether it late at night or rain a fall, we have to be walking alone at nights. Gunshots fire down here almost every night. You don't know when they are going to flare up. Plus, it is coming on to Christmas now, so you know the robbers are out. I don't know why we must endure this," declared the nurse as she described the practice as unfair.

"Sometimes you look down the road and the place clean, and it is these communities that they want the nurses to walk through; and this is what has been going on for weeks now," fumed the nurse.

Last Friday, Errol Greene, chief executive officer at KPH, told The Sunday Gleaner that while he was not aware that the downtown shuttle buses had been suspended, millions of taxpayers dollars are doled out to nurses and other KPH employees in taxi fares each month.

"The Kingston Public Hospital does not own a bus. The Ministry of Health owns buses and the region owns buses, but KPH does not own and operate buses. The nurses have a union and I would think that is the first place they would go with a complaint like that and not the media," he said.

But Janet Coore-Farr, head of the Nurses Association of Jamaica, was not impressed with Greene's response. She told our news team that the issue of late-night transportation for nurses has been a boiling one since she took office as president three years ago.

"Even if they give us money, which taxi company is coming for nurses at KPH after hours? If you are in a volatile area, why would you want your taxi to come there to pick up nurses? This is a recurrent issue for nurses at all the hospitals that are in volatile areas: KPH, Victoria Jubilee, the Spanish Town Hospital," said Coore-Farr.

"The civil servants have transportation that is provided between the Government of Jamaica and the civil servants. We have asked them to let us piggyback on that and I have not heard anything from them," said Coore-Farr. "Don't ignore the nurses, they are working late at nights, then walking on the road in their uniforms, which is very unsafe. It is very distressing. Don't ignore the nurses," added Coore-Farr.