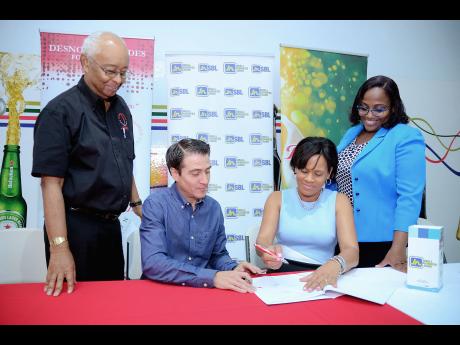 Contributed
From left: Noel DaCosta, chairman of the Desnoes and Geddes Foundation; Ricardo Nuncio, Red Stripe managing director; Gillian Hyde, general manager of Jamaica National Small Business Loan (JNSBL); and Terry-Ann Segree, private finance operations specialist of the Inter-American Development Bank were all gathered around the head table for the signing of the memorandum of understanding between Red Stripe and JNSBL. 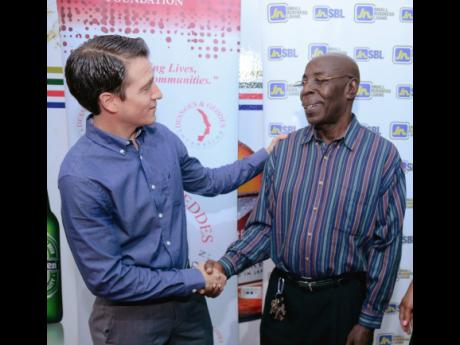 Contributed
Ricardo Nuncio (left), Red Stripe's managing director, greets Antonio Porter, Project Grow farmer at the Memorandum of Understanding Signing Ceremony between Red Stripe and JNSBL held at the brewing giant’s headquarters. Porter is the first beneficiary of the financing programme and is now able to pursue cassava production in collaboration with Red Stripe. An additional 13 farmers have applied and are currently being processed.
1
2

More than 120 independent farmers who are part of Red Stripe's Project Grow initiative now have access to specialised loans of up to $15m made available through a partnership with Jamaica National Small Business Loans (JNSBL). Farmers who have already benefited are excited about the prospects for their businesses.

"Red Stripe has created a market for cassava and has shown that this type of farming is viable. This partnership marks a great beginning for even bigger things to come," said Antonio Porter, a St Elizabeth farmer who became the first to access the fund. An additional 13 Project Grow farmers are currently awaiting approval.

Under the agreement, JNSBL provides specialised loans with an extended maximum moratorium of 12 months. Farmers get financing primarily for Project Grow kits that comprise planting material, fertiliser and drip irrigation equipment. However, they can also get loans to cover other improvements on their farms.

The new loan scheme is part of a wider project being implemented by the Inter-American Development Bank (IDB) to improve climate change adaptability in Jamaica.

Among the available specialised loans is the Climate Smart Loan, which allows beneficiaries to access up to $5 million and repay over 48 months at an interest rate of four per cent. Tailored to those who want to equip themselves with the tools needed to adapt to climate change, the loan allows farmers to purchase and install irrigation equipment, sow a climate-resilient variety of cassava and use climate-resilient fertiliser.

The other specially created product is the Agriculture Loan Special, which allows Project Grow farmers to borrow up to $15 million at a rate of 9.5 per cent with the possibility of up to 80 per cent loan guarantee at a fee of one to two per cent plus GCT per year for the principal amount outstanding each year.

"We are committed to the development of Jamaica by doing our part to ensure that regular Jamaicans can achieve their personal goals", said Gillian Hyde, JNSBL's general manager. "This initiative is important because it feeds the national agenda of Vision 2030 that speaks to agriculture and tourism. We commend Red Stripe on taking this step and working with us to bring this great idea into fruition."

MIF specialist Terry-Ann Segree noted, "This partnership marks a milestone on a journey to support real Jamaican entrepreneurs such as farmers. This venture gives credibility to 'grow what you eat, eat what you grow' and so Red Stripe must be commended for contributing to this vision by using raw materials."

Launched in 2013, Project Grow replaces imported high-maltose corn syrup with cassava starch in its brewing process. Currently, beer consists of 15 per cent cassava. By 2020, the company plans to increase that to 40 per cent. This will result in an increase in income for small-scale and medium-size cassava farmers. It is also expected to generate employment opportunities for vulnerable youth.