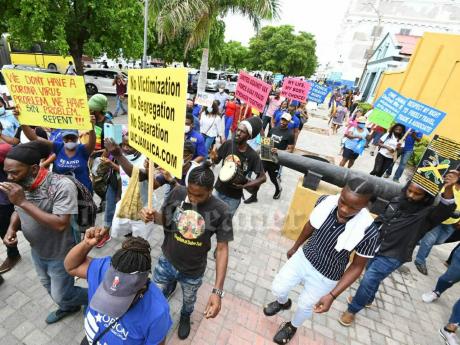 Protesters in an anti-vaccination march in downtown Kingston on September 22, 2021 – Rudolph Brown photo.

The police are now going through footage captured at Wednesday's anti-vaccination protest in downtown Kingston to arrest and charge persons who are deemed to have breached the law.

“We are looking at footage that we captured from these marches and meetings. We are going to, where we identify people, we are going to summon them. They will be prosecuted, so it is not yet ending,” Superintendent of Police, Steve McGregor, told The Gleaner.

The protest was organised by the United Independents' Congress, whose leader, Joseph Patterson, was among four persons arrested and charged by the police during the demonstration.

A fifth person was warned for prosecution.

Patterson's lawyer, Gavin Stewart, said he was bailed on Wednesday.

McGregor emphasised that persons have a responsibility to follow rules and regulations.

“There are guidelines and people will think that the police are being harsh but they did not get any permission to march, and there is a requirement if you're going to keep a public meeting and a march under the Public Order Act that you must apply to the police,” said McGregor.

“You can't gather so many people publicly and then to make utterances that you're going to march on Parliament to disrupt and we are to allow you to do that. There is no way any police force would allow citizens to behave like that. That's not freedom of speech and movement, that is an unlawful act. And they were trying to make it sound as if that is freedom of movement or freedom of speech,” he continued.