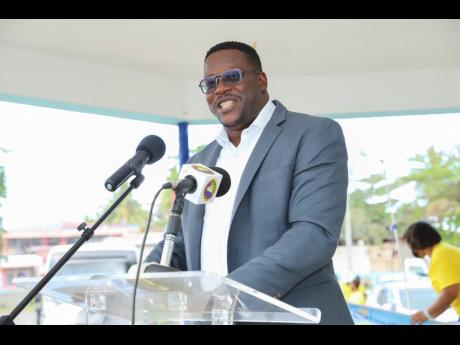 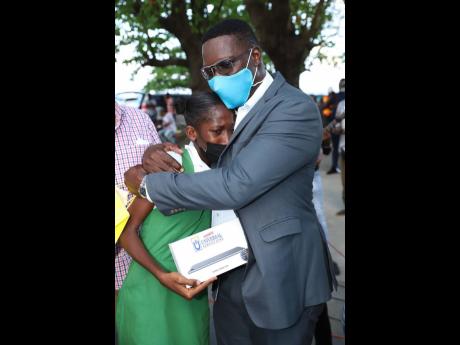 Contributed
Fourteen-year-old Jayvia Barnes, grade eight student at Morant Bay High School, is overwhelmed with joy after winning a tablet at the Wi-Fi launch in Morant Bay, St Thomas. Barnes is comforted by Stephen Price, vice-president and general manager, Flow Jamaica after she shared that her tablet had got damaged and this new tablet and Wi-Fi hotspot would make a difference for her education.
1
2

VICE-PRESIDENT and country manager of Flow Jamaica, Stephen Price, recently called for a more cohesive partnership including the Government, key stakeholders and the private sector to further drive national development.

Over the years, Flow has remained committed to bridging the digital divide, including challenges such as accessibility, affordability and access to devices. More recently, the company, through its foundation, has also invested heavily in a digital literacy programme – free of cost to all Jamaicans.

Price was speaking at the launch of the first public hotspot zone in Morant Bay, St Thomas.

Referring to the expansion of access as a “national imperative”, Price stated that his company takes its role in the project seriously.

“We are partners for the future. We are powering national development with innovation and technology, and it is through partnerships like this that we will continue to positively impact the lives of Jamaicans across our country. This hotspot is just one of many that we are powering across Jamaica under this initiative with the USF,” he shared.

Addressing the issue of accessibility, Price referred to advancements in St Thomas’ infrastructure, stating that the company had synchronised its fibre-build plan with the ongoing road construction, as it makes Internet service readily available to more communities.

“We are bringing fibre to St Thomas… all the way along this road. The roadwork is enabling that kind of progress, that kind of development and we are going to continue to build [our fibre network in] more and more communities in St Thomas,” he said.

Since 2020, the communications and entertainment company has provided fibre connectivity in over 500 communities across Jamaica, which allowed many households to have Internet access during the pandemic. Flow has invested over USD$300 million to connect these communities, enabling digitisation across Jamaica as it prepares businesses and residents for the future.

Price also hinted at providing connectivity for new hotels, which are on the horizon for the parish. “I hear hotels are coming here, mayor. We are definitely going to be powering them for you,” he stated.

Beyond the challenges of connectivity, he noted that others such as “learning loss” due to the closure of schools; adverse challenges in tourism, SMEs and the education sector, which have suffered massive blows due to the pandemic. Price explained that the pandemic has “exposed the true status of connectivity” in the island and “brings into sharp focus the digital divide”.

On the matter of affordability, he called on the Government, stakeholders and the private sector to work together to make affordability a reality for Jamaican households.

“This conversation must consider that even if the issue of access is addressed, a very significant challenge is the inability of many to afford broadband service. It, therefore, means that respective governments, while they manage the tough fiscal purse, must also balance this with the income levels of the very population that we are trying to serve,” charged Price.

He suggested capitalising on the initiatives that have worked for other countries where there are structures in place to protect the most vulnerable, so they can still have Internet access. One such example is Biden’s ‘Build Back Better Plan”, which provides “subsidised” access to broadband in the United States of America. To this end, Price suggested using the PATH structure to drive the initiative.

“We believe this can happen in our country through public private partnerships. Most countries have social safety nets through which they cover the most vulnerable in society. In Jamaica, we have PATH and PATH represents a huge upliftment to many of our citizens. Imagine if we used the markers of PATH, which recognise our most vulnerable, to be able to provide them with broadband access – either free or subsidised,” he said.

With regard to access to devices, he suggested “removing external tariff duties” on tablets and other devices, which could potentially reduce the cost to the public and make the reality of owning a device affordable for many. Access to devices would allow for higher broadband connectivity rates, which would increase productivity and efficiency, unlock the potential for more jobs, and facilitate remote learning – all of which would result in “higher GDP per capita” due to the growth of the economy.

He closed by inviting community members to take advantage of the free ‘Skills For the Future’ programme offered by the Flow Foundation, now that they have a new Wi-Fi hotspot in the area.

Through its C&W Business arm, Flow has embarked on a collaborative initiative with the Universal Service Fund, an agency of the Ministry of Science, Energy and Technology, as the leading broadband provider in the islandwide Wi-Fi roll-out programme.