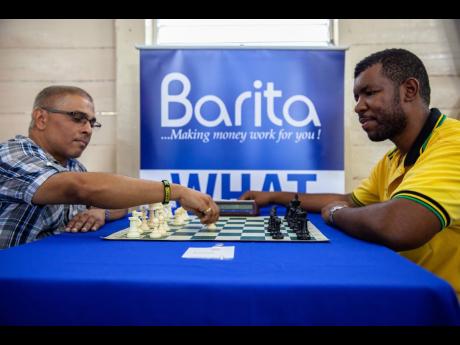 Contributed
International Master Shane Matthews (left) - in final-round action against National Master Ryan Blackwood at the Barita Chess Open, which took place at The University of the West Indies on Saturday.

Scores of chess players, including several masters, competed at the 2019 Barita Chess Open, which took place on Saturday at the University of the West Indies.

This was the second staging of the rapid event and was organized by MR Games, which welcomed Barita Investments Limited this year as the headline sponsor.

International Master Shane Matthews won the main Open Section finishing with an unbeaten 5.5 points, including victories over National Master Raheem Glaves and defending champion FIDE Master Shreyas Smith. He sealed the victory with a final-round draw with National Master Ryan Blackwood. There was a four-way tie for second place with 4.5 points between FIDE Master Malaku Lorne and other Masters Blackwood, Glaves and Smith. Raehanna Brown of Campion College was the best female player.

Justin Watts of Ardenne High School and Nathan Walsh of Campion College tied for first in the Under-16 section. Watts took first place on tiebreaks as he defeated Walsh in the third round. Damari Bryce of St Jago High School and Shamir Martin of Glenmuir High School were third and fourth respectively. Laila Griffiths dominated the Under-12 section, finishing on a perfect score of six points. Rohit Mahtani, Harvey Corbin, and Nathaniel Hope tied for second place with five points.

Tournament director Zachary Ramsay said he was “pleased with the tremendous support from Barita Investments Limited and the entire chess community, and furthermore pleased with the educational value it provided for the scores of ambitious chess players.”