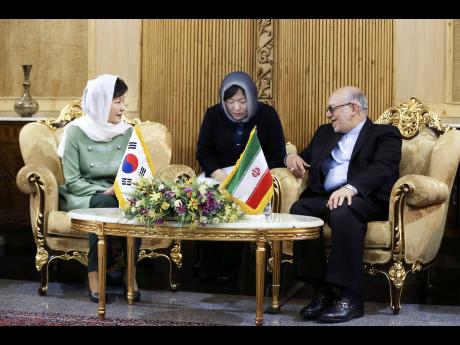 AP
South Korean President Park Geun-hye (left), listens to Iranian Industry Minister Mohammad Reza Nematzadeh upon her arrival at Mehrabad Airport in Tehran, Iran, yesterday, May 1, 2016. Park Geun-hye has arrived in Tehran in the first such high-level visit since the two nations established diplomatic ties in 1962. An unidentified interpreter sits at centre.

South Korea's president arrived in Tehran yesterday for the first summit between the two countries since they established diplomatic ties in 1962.

President Park Geun-hye's office said, ahead of the three-day visit, that she would hold talks with her Iranian counterpart Hassan Rouhani on the Korean Peninsula and ways to promote bilateral ties.

Iran has been seeking to integrate into the global financial system and improve ties with other countries since nuclear-related sanctions were lifted in January under a landmark deal with world powers.

Energy-hungry South Korea, the world's fifth largest importer of crude, used to be one of the biggest buyers of Iranian oil, but imports plummeted as a result of sanctions.

IRNA said trade between the two countries is currently at $6.1 billion, and that Tehran would like to boost that to $17.4 billion, a level last reached in 2011, before the nuclear-related sanctions were imposed.

Iranian Oil Minister Bijan Namdar Zangeneh says Iran has raised its oil and gas condensate exports to South Korea to 400,000 barrels per day, a fourfold increase since the nuclear deal was implemented in January.

Iran and North Korea, which forged diplomatic relations in 1973, have long been suspected of being close partners in weapons technologies. North Korea was slapped with tougher UN sanctions for its fourth nuclear test and long-range rocket launch earlier this year.

Iran has denied ever seeking atomic weapons, insisting its nuclear programme is for purely civilian purposes like power generation and medical research.