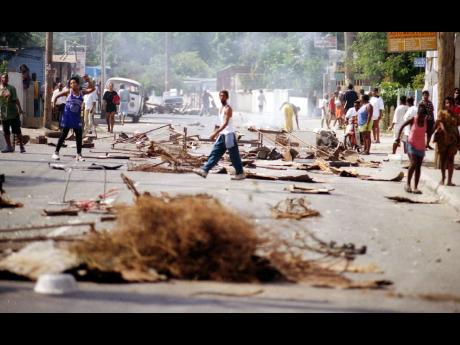 CIA may foment social unrest to undermine the Government. - File

Last year's Budget was presented in the shadows of exploratory talks with the International Monetary Fund (IMF). The Budget turned out to have been virtually useless. Despite drawn out and still mysteriously secretive negotiations, we ended up with an IMF agreement "crafted in Washington and delivered in Jamaica", as one newspaper put it. That agreement was necessary after the failure of the Government's economic stimulus package, multiple budgets and supplementary taxes last year.

This year's Budget has been presented in the shadows of extradition talks with the United States government. It comes with the intrigue of high politics attached which makes predicting the outcome of the 2010-2011 Budget so precarious as to wonder once again if it will be of any real value.

Last year's Budget was challenged for the lack of its credibility and questions about the competence of the minister of finance.

This year's Budget can be challenged for the lack of credibility of the entire government, led by the prime minister, considering the incredulous statements and manoeuvrings over the Coke extradition and its related intrigues. How credible can the prime minister possibly be when he speaks on the Budget next week?

In the 1970s, Cheryl Payer set out the typical IMF Structural Adjustment Programme (The Debt Trap, 1974). It included, privatisation, trade liberalisation, foreign exchange liberalisation, removal of subsidies, wage freezes, public sector layoffs, and increased taxation. We spent a lot of time last year arguing about whether the IMF had changed or not. The style has but the substance has not.

This year we should also talk about whether the United States' national security strategies have changed. In the 1970s, ex-Central Intelligence Agency (CIA) agent Phillip Agee spoke out in Jamaica about the typical CIA strategies, some of which he said were at play here. These strategies included disinformation, ideological warfare, fomenting demonstrations, fomenting violence, targeted assassinations and assisted coups. Jamaica has now run straight into a fight with the US state and justice departments over the extradition of a "most wanted" don. These are not agencies to pick fights with, not of the nature of the present fight. The US Treasury Department is not one we would want lining up against us either.

We are already seeing what some believe are sure are signs of soft power being exercised by the US against Jamaica. These range from highly critical State Department reports on Jamaica's lack of co-operation on the extradition, reported Justice Department investigation of three ministers of government, revocation of visas, speculation over the delay in American confirmation of Jamaica's new ambassador to the US and in appointing one of its own to Jamaica, and over the refusal of the US Department of Transportation to extend Jamaica's Open Skies Agreement. The US could later publish unfavourable travel advisories and blacklist Jamaica in future narcotics reports with dire economic consequences.

The State Department can make things difficult in other ways. Experience from the way they deal with other countries, including important NATO allies in Europe, shows that how they write their diplomatic profiles of prime ministers, foreign ministers, ambassadors to the US and other officials signals things like whether those officials are co-operative on national security and are compliant with IMF programmes. Such a serious matter as our extradition issue will not escape the updates on the profiles of our principal government ministers. These profiles are circulated to all American officials who have or will have anything to do with negotiating with Jamaica on trade, security, immigration, climate change or any other matter.

This could also put CARICOM in a most awkward position since Bruce Golding will assume the chairmanship of CARICOM in July and Jamaica has portfolio responsibility for CARICOM's external affairs.

Just as the Jamaican government has reportedly proposed involving the United Nations in the extradition matter, it might try to use CARICOM as a dispute settlement forum. But the US will be on the lookout for those CARICOM members who might ally with Jamaica or seek to use the Jamaican approach to stall progress in any similar connection they might have with drug criminals since the US will not want the rot to spread.

CIA memos are also circulated in the international diplomatic and intelligence communities. The US looks for pressure points to press in order to squeeze an offending government. We might be seeing evidence of this here. I am not sure of any CIA involvement in Jamaica at this time, but targeting the visas of Jamaican dancehall performers would fit this strategy. These performers are folk heroes. To make the public believe that they could lose their chance of travelling to the US, if say they are photographed at targeted dancehall concerts, undermines popular support for the offending government and any mileage the prime minister might expect to get from western Kingston by his grandstanding in Parliament.

The CIA will also influence public opinion by planting stories in the media through unwitting journalists or willing ones. This might be necessary when a public does not take a situation affecting US national security seriously. When there is apathy or a tendency to joke away a serious problem, the CIA might stir up anger by placing anxious stories locally and internationally. We know that the Coke story has appeared in respected and widely read magazines like the Economist and most recently the Globe and Mail. The State Department has experts in communications analysis and its bureau of intelligence and research is good at putting its stories out to counter the spin of government communications departments and public-opinion sympathisers.

The bottom line is that the CIA does not want the offending government to manipulate public opinion and turn it against the US and it will step up its influence when the media and civil society seem ineffective, uninterested or intimidated. The newspaper that carried the story about three senior government ministers being investigated in connection with the Brady affair speaks of its 'well-informed' sources. It makes you wonder who these sources are to warrant them a front-page headline story, so far unchallenged.

There lies the ultimate connection to Jamaica's Budget. Everything lies, not on the Budget presentation of April 8, but on passing the quarterly IMF tests over 27 months. What success we have will depend on what profiles and memos are sent around to American diplomats, congressmen, and businessmen, including the profile of our newly designated ambassador to Washington.

In the 1970s, Henry Kissinger gave orders to make the Jamaican economy scream because Jamaica had made friends with Cuba. If they believe we are making friends with crime lords, we might be made to scream again, or are we screaming already? If we are, does Mr Golding really have any moral authority to speak to us on Tuesday?