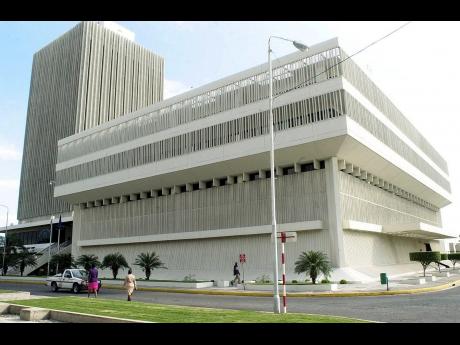 The Bank of Jamaica (BOJ) intervened in the foreign exchange market again on Tuesday, selling United States dollars to its dealers and cambios in an effort to prevent large swings as the continued depreciation in the exchange rate, resulting in the Jamaican dollar trading above the $117 to US$1 mark.

There were no stipulations on the resale rate as the central bank continued the less restrictive approach to market interventions it adopted since December last year.

Despite the bank's intervention, the Jamaican dollar continued to climb, closing at $117.10 on Wednesday. In inter-day trading, the US dollar was being sold at a high of $123.05 and a low of $114.

Since the start of the fiscal year 2015-16, the BOJ has intervened in the foreign exchange market on four occasions, two in May and one each in June and July, selling a total of US$196.4 million and purchasing US$71 million.

BOJ Senior Deputy Governor John Robinson told the Financial Gleaner that "the bank generally intervenes to smooth the flow of foreign exchange in the market and to prevent large swings in the exchange rate on either side".

Robinson said there was no restriction on the resell rate and that the central bank was not defending any particular rate.

In relation to the effect of interventions on the net international reserves (NIR), he said the net impact from the interventions approximated a decline of US$85 million since April 1.

Notably, he said, "The BOJ's operations have resulted in an overall positive impact on the NIR since the start of the fiscal year as the foregoing analysis does not account for the standing purchase arrangements, or CD placements, with the BOJ."

The central bank also said that the acceleration in the pace of depreciation of the Jamaican dollar against its United States counterpart was not likely to significantly change its projections for inflation for the 2015 period.

The depreciation compares to several months of slow appreciation, from early February to early April, which was said by local analysts to have been caused by the Jamaican dollar requirements of tax season.

One analyst suggested that because of huge tax payments, there was a high demand for Jamaican dollars and so persons sold US dollars to make those payments.

On Wednesday, the central bank said that higher demand in the June quarter 2015 appeared to have been occasioned by more imports.

"Following an estimated current account surplus in the March 2015 quarter, payments for imports appear to have been higher in the June quarter, warranting higher demand for foreign currency. In particular, foreign currency demand from the energy sector was higher in June, given the recent increase in oil prices," the BOJ said in emailed responses to Financial Gleaner queries.

The bank said that since the start of the fiscal year, the exchange rate has depreciated by less than two per cent

At the end of June, the 12-month point-to-point depreciation in the exchange rate was 4.2 per cent, "much slower than the annual rate at end-March 2015," the BOJ noted.