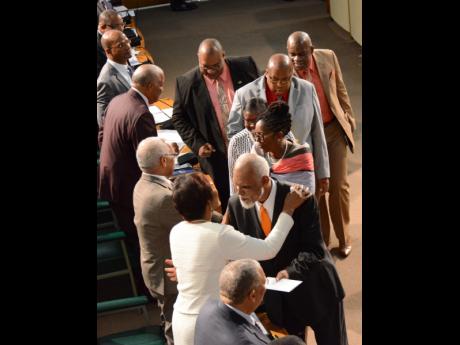 Rudolph Brown
One by one they paid their tributes to Portia Simpson Miller at a Special Joint Sitting of the House of Representatives and Senate on Tuesday. 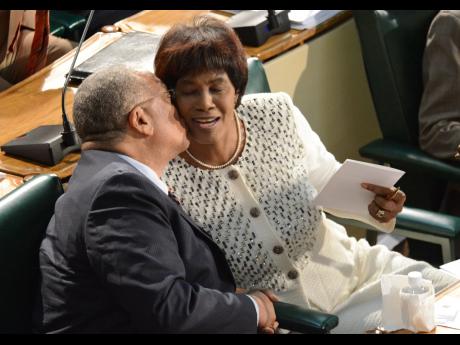 The parallels between Portia Ashman and the woman she was named after when she was born in 1972, Portia Simpson, continued over the next two decades.

Ashman gave birth to her first son in September 1996, and she describes it as the high point of her life to date. A decade later, one of the high points of Portia Simpson's (now Miller) life would be achieved when she became People's National Party president after surviving another brutal internal contest.

Days later, she was crowned Jamaica's seventh prime minister and only the third female head of government in the anglophone Caribbean after Eugenia Charles in Dominica and Janet Jagan of Guyana.

At her inauguration on March 30, 2006, the opening lines at her swearing-in ceremony were: "Who would have thought that a girl from Wood Hall in St Catherine would become prime minister of Jamaica?"

In front of approximately 10,000 guests and thousands more at home and abroad, Prime Minister Portia Simpson Miller pledged to foster and facilitate conditions for employment and wealth creation and promised to advance human rights and individual liberty.

Passion for the poor

"We cannot build the harmony and peace that this society so desperately needs unless all Jamaicans know that they will be treated with dignity and respect ... .

"I pledge to ensure that the interests of all our people are protected and that victimisation never rears its ugly head in anyway under my administration."

Known for her passion for the poor and dispossessed, the new prime minister argued that there could be no economic transformation without an overhaul of the education system.

Just over a year later, the most popular woman would call general elections for August 27, 2007. Flooding and heavy rains caused its postponement to September 3 when she led her party to a 32-28 defeat to the Jamaica Labour Party under Bruce Golding.

Simpson Miller was to lead the PNP to victory in 2011 before again tasting defeat with her party in 2016.

Portia Ashman has since relocated to the United States, while, Portia Simpson Miller will, today, walk away from the main stage of representational politics after more than 40 years of playing an innings that has caused Prime Minister Andrew Holness to describe her as "no ordinary woman".