Get out a mi lan’ and mi head 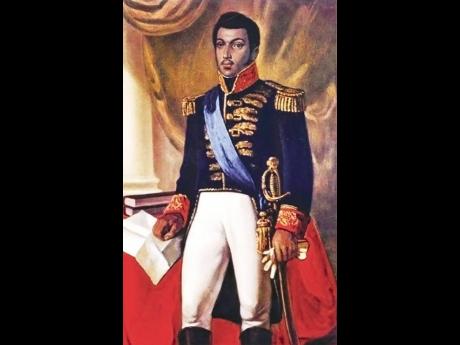 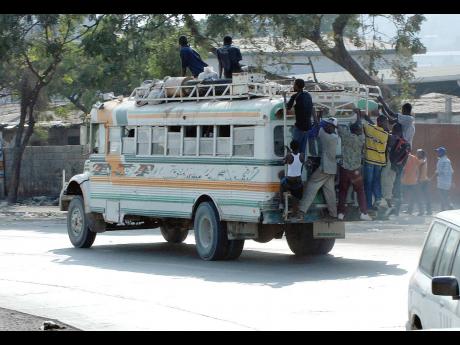 File
A group of men hang on to a bus in Port-au-Prince in this 2010 file photo. When Haiti won its independence 218 years ago, it came at a hefty price – at the time of the Haitian bicentenary President Aristide announced the figure of US$21B as the debt still owed.
1
2

Today we pay tribute to the freedom fighters who ensured the decolonisation of Ayiti, a country whose struggle against colonialism has influenced the declaration of UNESCO’s “International Day” for the remembrance of the transatlantic trafficking in Africans and its abolition. This expression of memorialisation provides an inclusive space for all people to remember the victims of the Ma’angamizi, reflect on its legacy, and honour those who fought for its abolition. In this regard, I invite us to pay tribute to those who ensured the decolonisation of Ayiti, among them: Boukman Dutty, Cecile Fatiman, Toussaint L’Ouverture, Henri Christophe, Jean-Jacques Dessalines and Alexandre Pétion.

Their opposition to the obscenity of chattel enslavement, imposed on them by France, provided the rationale for their struggle for Emancipation and Independence. They paid dearly for daring to say no to continued French colonisation; for when Haiti won its independence 218 years ago, it came at a hefty price – at the time of the Haitian bicentenary President Aristide announced the figure of US$21B as the debt still owed. Constant Méheut and Matt Apuzzo along with a team of journalists revealed in the New York Times that a more precise price tag for the double debt (these payments, and a loan from a French bank to cover them) was 112 million francs, or about US$560 million today. Ayiti is the only nation where descendants of enslaved people paid reparations to the heirs of former enslavers for generations. The effect of that illegal extraction is obvious today.

We hold on to the fact, though, that their struggle also inspired many others in the Caribbean, the USA and Latin America to support the idea of decolonial justice that eventually led to the success of independence movements in places under British, Danish, Dutch, Portuguese and Spanish domination. The Haitian Revolution after all represented for all oppressed people a break with forced labour on plantations and other enterprises, which undergirded the colonial system.

Indeed, the 18th and 19th centuries can be defined as the height of the second phase of western hemispheric decolonisation, the first having started with resistance to conquest in the 15th century. Whatever the phase, the message of colonised peoples to colonisers has always been “get out of my land and remove your demeaning ideologies from my head space!”

One example of this liberation Ayiti provided can be seen in the case of President Pétion’s response to the demand of the owner of the boat Deep Nine, enslaver James Mc-Ewan. McEwan demanded President Pétion return the 15 enslaved people who had escaped on that boat to Ayiti in 1816. They left him stranded on the shores of Jamaica, knowing full well that freedom and the rights of human beings, not continued categorisation as chattel enslaved, awaited them in Ayiti. For after emancipation in Ayiti, all Africans enslaved in other countries who reached her shores were given freedom and citizenship. President Pétion responded that the British enslaver in Jamaica could get his boat; for that was the only item of property he had in Ayiti.

Resistance, as Africa and its diasporas have shown, has always been in the form of armed struggle and non-violent forms of non-cooperation and protest; for at the heart of the project of decolonisation is resistance: resistance to invasion, conquest and forced occupation; resistance to chattel enslavement; resistance to foreign political domination and resistance to what the late Rex Nettleford called “desmadification” (that is using laws and practices to treat African people as non-persons). Decolonisation in the more political sense is the struggle for self-determination and self-rule, which is why in the case of the Caribbean, my example this evening, the modern decolonisation movement has been marked by the struggle for independence and self-determination.

Suffice it is to say that every form of subjugation generates an opposing struggle for liberation. The antithesis of colonisation is therefore decolonisation, said by author Jurgen Osterhammel to be “a technical and rather undramatic term for one of the most dramatic processes in modern history: the disappearance of empire as a political form, and the end of racial hierarchy as a widely accepted political ideology and structuring principle of world order”. – at least for a large part of the world. We must bear in mind that there are places defined as Trust and Non-self-governing territories that come under article 15 of the UN’s ICERD and Britain has a significant share of them; but there are several other non-independent countries in the world that are referred to by all sorts of euphemisms when they are really colonies in need of decolonisation.

Decolonisation has its burdens, though, especially when achieved without compensation. Decolonisation gave ex-colonies freedom of action, but seldom the opportunity to exploit it to full advantage because firstly, economic decolonisation does not necessarily accompany political decolonisation. In this regard, we must continue to support Ayiti in her fight for the return of the reparation extracted from it by France as well as support other reparation movements in the Caribbean and Latin America. Indeed, every person in this global village of ours must develop a new moral outrage at the failure of former colonial powers to engage in a reparatory justice conversation with their former colonies, given the obvious impact and lingering legacies of colonialism. If you aren’t outraged by the fact that there is a direct relationship between colonialism and the present political and socio-economic situation in Ayiti, for example, you are blind to historical and modern-economic facts or have no moral compass.

Let me also say that while this International Day is in memory and recognition of the Haitian Revolution against France and its allies, we must also use the day to pay tribute to other freedom fighters and other enslaved Africans who were the victims of colonialism by other powers. It is also vital that we recognise that there is another imperative of decolonisation. I term it “ideological decolonisation” which must include true liberation from Victorian ideologies and practices and racist thoughts and practices that manifest themselves in structural inequalities in politically independent nations. Unfortunately, the ideological rationale and basis for colonialism or the thoughts that were used to justify white supremacy have not been totally decolonised. In other words, the post-colonial world has retained forms of colonialism as expressed through manipulation, exploitation, cultural expropriation and inequalities, even if colonialism itself as a political phenomenon belongs to the past.

In his 1952 Black Skin, White Mask Franz Fanon analysed the impact of colonialism and its deforming effects, and argued that white colonialism imposed an existentially false and degrading existence upon its black victims to the extent, that it demanded their conformity to its distorted values. But even if conformity was demanded, we could not then and cannot now give in to these distorted values.

This essay a summary of the 5th Annual London City Hall Event to commemorate the UNESCO International Day for the Remembrance of the Transatlantic trafficking in Africans and its Abolition delivered by Prof Verene Shepherd on August 23, which was hosted by the mayor of London, Sadiq Khan.