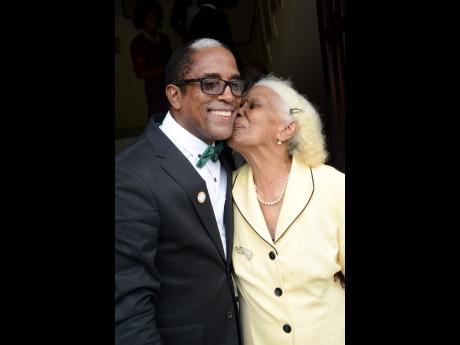 Rudolph Brown
A proud mother, Eulalee Walters (right), kisses her son, Dr Norman Dunn, in Parliament yesterday before he took his seat as a member of parliament for the first time. 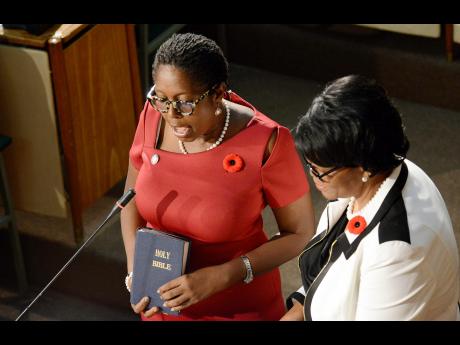 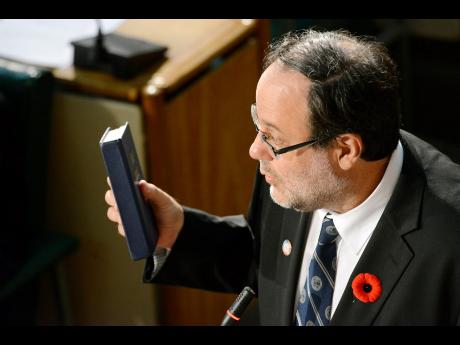 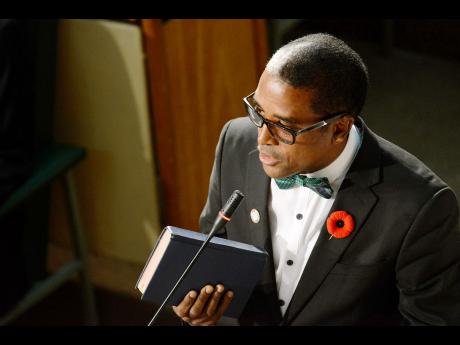 For 20 months, Prime Minister Andrew Holness has operated a Government with a one-seat majority in the House of Representatives.

But that changed shortly after 2 p.m. yesterday as Dr Norman Dunn took his seat on the Government benches as the representative for St Mary South East.

Dunn was one of three winning candidates in by-elections held on October 30, and all three were sworn in as members of parliament (MP) yesterday.

They both took seats on the opposition front benches to thunderous applause from their parliamentary colleagues.

However, it was Dunn who received the loudest welcome to the House, with MPs on both sides banging furniture in a show of respect.

Government MPs rose to their feet to salute Dunn, who defeated the People's National Party's Dr Shane Alexis to gain the right to replace the late Dr Winston Green in the Lower House.

The absence of Opposition Leader Dr Peter Phillips, who had indicated from last Saturday that he would be off the island on a previously planned engagement, was ammunition for the government MPs, with some suggesting that Golding should sit in the chair usually designated for Phillips.

The suggestion brought laughter in the House, but Golding was unfazed as he sat in his chair next to the empty seat and gazed at the almost full chamber.

Before the swearing in of the three new MPs, members of the House were pinned by students from high schools in the Corporate Area as the United Nations sought to highlight the need for continued action on the global Sustainable Development Goals (SDGs).

UN Resident Coordinator Bruno Pouezat, speaking with The Gleaner following the ceremony, said it was important to bring awareness to the efforts that are being made to achieve the SDGs and to provide encouragement to the MPs to continue to push the agenda.