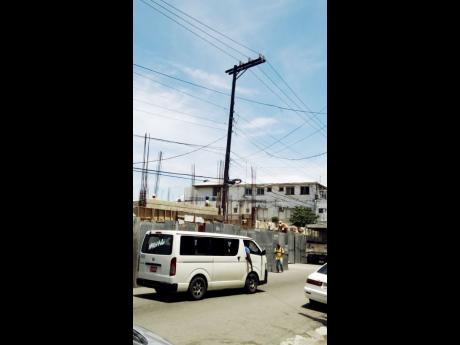 Gareth Davis Sr
The Jamaica Public Service utility pole that is slowing the construction of a multimillion-dollar police station in Port Antonio, Portland. 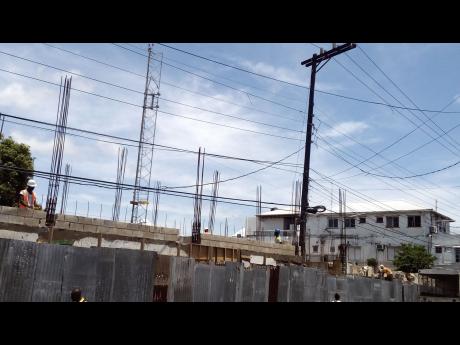 The construction of a multimillion-dollar police station in Port Antonio, Portland, is reportedly being stalled by a Jamaica Public Service (JPS) utility pole that the company says it will have to be paid millions of dollars to relocate.

Assistant Commissioner of Police Warren Clarke last Tuesday told The Sunday Gleaner that if the utility pole is not removed quickly, it could push the project beyond its scheduled 18-month construction schedule, and impact the ability of the cops to police the eastern parish.

"The pole is in the middle of the construction. We wrote to them (JPS) about three months ago and they said that it would require approximately $4 million to remove the pole, even though it is government land," said Clarke.

"We need to bring home this project in 18 months. Four have gone already and this pole is impeding us. The JPS has just not been cooperating.

"The JPS is requiring the JCF (Jamaica Constabulary Force) to pay the money, and we are saying that this is a service to the community, there is great public interest and public benefit, and they should be good social partners and assist this programme," argued Clarke.

He said the JCF would be willing to discuss a reduced price for the job.

"We would appreciate anything, but what they (JPS) are doing is saying 'take it or leave it', and we are saying if that is so we have to make the public know what kind of utility companies are serving us," added Clarke, as he stressed the importance of policing in the island's most peaceful parish.

Late last week, the JPS confirmed that it had received a request for relocation of the pole from the police and prepared a quotation which was $3.1 million, and not $4 million.

The company hinted that this figure could be even lower, based on talks with the cops.

"This project would involve removing the pole to the other side of the road, as well as planting four additional poles to support the redesign and to ensure public safety," said the JPS.

"Upon further consideration, and in recognition of the challenge this poses for the police, who are not only customers, but also special partners of ours, we are willing to work together and make some concessions on the cost to facilitate their building project.

"We will be having continued dialogue on the matter towards expediting the implementation," added the JPS.

JPS: Pole relocation can be a very costly exercise

The factors which may impact the cost of a pole relocation include:

- Rerouting how the line traverses, which is a redesign of how the lines run; relocation of everything that is on the pole, including such elements as transformers, customers' service wires and street lights (if relevant).

- The cost of materials to effect the relocation, as well as any other additional poles required for the rerouting; the type of digging required - whether in dirt, marl, rock, etc.

- Ensuring that the new route of the lines does not negatively impact other customers/buildings/private property.

- Acquisition of easement (where relevant); and

With the variety of factors involved, no two relocation jobs may necessarily be the same in terms of the cost implications.