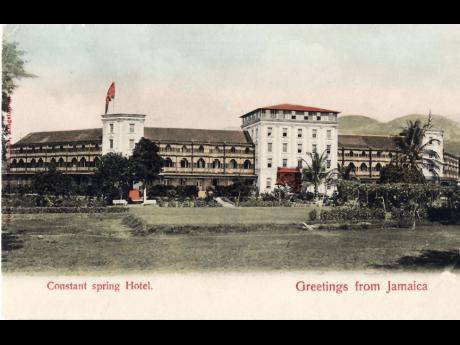 Prior to my arrival, I had written a letter to The Gleaner, appealing for information without giving away too much.

Genealogist Donald Lindo and I spent days scrolling through microfilmed records in the General Register Office; we scoured old newspaper files; we searched parish church records and visited undertakers; we called on the Society of St Vincent de Paul, which had had long since ceased to care for fallen women and was now an old people's home; we drove to Maiden Lane, where Ethel had lived, discovering that it had been razed to the ground when a paint factory caught fire in 1969.

We found nothing. Ethel and her son Keith Neville McDonald had disappeared off the face of the earth.

After 10 wasted days, Donald and I were forced to concede defeat. But before returning home, I asked him if he could arrange a visit to the former Constant Spring Hotel. I was curious to see it.

When Jock arrived in Jamaica on Christmas Day 1910, the hotel was at the peak of its popularity. Set in a 130-acre tropical parkland, it boasted 'a French chef, a concert hall, dancing by moonlight and the finest musical entertainment in the Caribbean.'

But the hotel fell on hard times during the Depression. After several attempts to restore its fortunes, the Franciscan Sisters of Allegany took over the property and established the Immaculate Conception High School which today is one of Jamaica's top schools for girls.

The last guests checked out more than 70 years ago, yet if they returned today they would find the hotel much as they left it, frozen in its colonial past. The grand, tiled entrance hall is unmistakably that of a hotel, the glass office from where the concierge directed his small army of bellboys still intact.

The oak-panelled bar, converted into a dining room for the Sisters, retains the distinctive look and smell of a bar despite the absence of liquor and cigars for more than 50 years. Adjoining it, the old barber's shop has become the Sisters' main office, its long mirror stretching the whole length of the room. The breakfast room is now a chapel, the swing door to the kitchen still in evidence.

But these were not the rooms I came to see. 'Will you show me where the orchestra played,' I asked Sister Maureen Clare, head of the Franciscan Sisters in Jamaica, who had so kindly agreed to show us round.