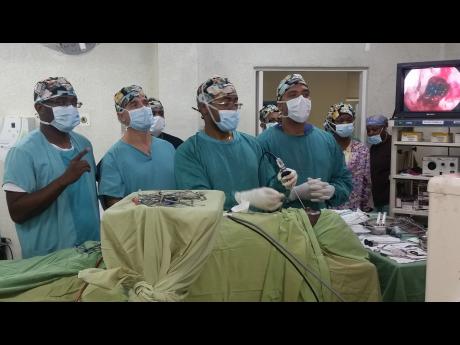 Contributed
From left: Dr Guyan Channer and Dr Enrique Iturriaga instructing Dr Warren Mullings and Dr Francis Barnett during an ENT surgery at the Kingston Public Hospital, while other team members look on.

A group of visiting medics from Jacksonville, Florida, teamed with local experts from the Kingston Public Hospital (KPH) over the Easter period to bring joy to several persons who were awaiting surgery for various issues affecting their ears, nose and throat.

According to Dr Guyan Channer, consultant ear, nose and throat (ENT) surgeon, the visit of the medical professionals between March 14 and 15 assisted greatly in providing surgeries for the patients who needed them urgently.

"The surgeries were mainly to facilitate patients who had very bad sinus-related diseases that were complex and would have been difficult for our team here to manage," said Channer who heads the ENT Department at KPH.

"Medtronic sent a team of surgeons and rhinologists. So Dr Enrique Iturriaga helped us by going through the surgeries preoperatively and intra-operatively and guiding us along the way," added Channer.

He explained that rhinology is the study of the nose, including the sinuses, and concerns itself with medical and surgical diseases of the nasal passages as well as para-nasal sinuses.

Channer said one of the lucky patients was a Jamaican male in his 20s with a history of sinus problems and on whose behalf a prior attempt was made at surgery.

At that time, the doctors determined that it was not possible to remove all the fungus because of an inability to enter certain parts of the sinus.

"This patient had extensive fungal sinusitis, not the most common type of infected sinusitis which would be caused by viruses and bacteria.

"You can have fungus within the sinuses that stay in and populate the sinuses, and in his case, it was so bad that it pushed beyond the walls of the sinuses, pushing back on his brain, and pushing on to his eyeball," explained Channer.

For such a diagnosis to be made, the patient would present with bulging eyeballs and a long-standing history of sinus problems. In this case, a CT scan of the patient showed that his entire sinuses was filled with fungus.

"It's often difficult to say what would have caused fungus to populate, but in a small number of cases it can be because of a compromised immune system.

"In a majority of cases, it was just an opportunistic agent. The fungus finds its way to the sinuses and if all the conditions are correct, it just starts to grow," said Channer.

He said the initial plan was for three surgeries to be done on the first day that the team visited, but the first surgery took 10 hours and left the team members utterly exhausted.

On the second day, two surgeries were done and one included a patient with cerebrospinal fluid leak - a condition where fluid, which normally circles around the brain, starts leaking through the nose.

Channer said the team visiting introduced a method and equipment, which resulted in minimal scarring of the patients and almost invisible incisions, resulting in less blood loss and less hospital time.

According to Channer, the expertise of the visiting medics and the knowledge imparted will assist the local doctors to complete the remaining surgeries.

The team was brought to Jamaica by Medical Technologies Limited, a company which distributes state-of-the-art medical services and equipment through its distribution arm, Medtronic.

A spokeswoman for the company, Harisha Buggam, told The Sunday Gleaner that its vision is to develop health care in Jamaica through science and technology.

"The technology and equipment were some of the best on the market. It's technology that the ENT surgeons have been longing to get their hands on to cut down on the amount of surgery time," said Buggam.

"The whole aim is to assist the surgeons to reduce operating time and to allow better-quality service time to their patients. So the mission really was to bring down the surgeons and for them to demonstrate their skills using the equipment, and to guide our local doctors on usage. That's how we came in," added Buggam.