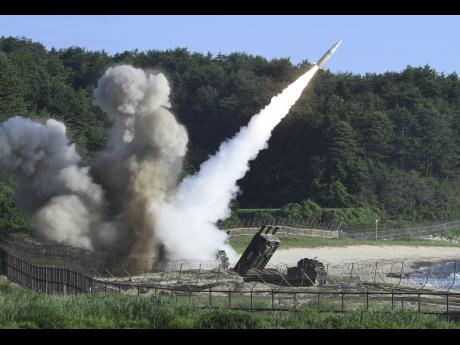 AP
Babylon is the symbol of international power, politics and military conquest.

Revelation 18: 3-4 says, "For all the nations have drunk of the wine of the wrath of her fornication, the kings of the earth have committed fornication with her, and the merchants of the earth have become rich through the abundance of her luxury. And I heard another voice from heaven saying, 'Come out of her, my people, lest you share in her sins, and lest you receive of her plagues'."

Babylon is simply a system without God and stands in contrast to the Church as a society that persecutes God's people, and thus it will inevitably be destroyed - it is coming down. God is preparing the Church to be in order, as the nations will be looking to the Church to take charge. Babylon is an industrial, economy-driven/market-driven, commercialist and godless society; and it does not want God to be a part of it. So we will continue to see laws being passed to eradicate God's people. Many will fall, and many more will get corrupt because of the money, fame and power that comes with the system.

The drugs, human trafficking and systems they invented in order to get rich, I guarantee that from now to the next 18 months there will be weeping, wailing and gnashing of teeth among businesses and the political sector. Babylon is the symbol of international power, politics and military conquest. Inflation, scarcity and cosmic catastrophe will take place. Military conflict to dominate nations will take place. Pestilence and murder will increase because of Babylon.

From the headquarters of Babylon, the anti-Christ system will make it possible for many to get rich, thus integrating themselves to many nations of the world. Many leaders will promise finance and opened doors to their nation without realising that these systems are about to shackle them and bring them into captivity also. So what they don't know is that any system that is built without God will be coming down. We are about to see the end of a system will give way for a new Kingdom system.

What Christians should know

We must recognise that we have voting power, we pay taxes, and we have purchasing power. We are the salt of the earth, the true light of the world, we have spiritual power, we can pray, fast, decree and declare - and we can change decrees and decide who rules over us. Every Christian should know their rights and that befriending/embracing world systems makes you an enemy to God. The world has been using globalisation, economic development, security and gender issues in an effort to destroy the Church. Hence, we will see more interfaith religion and more Christians will be forced to compromise to accommodate their duties in the working world; so morality will be thrown through the window. So now, we are headed for a borderless, cashless society. Furthermore, our personal information will be easily accessible by anyone in the world.

This system has been put in place to preserve prosperity and luxury for a few. But any system built without God is about to crash and that is why God is calling His people to have a new mindset - so that materialism will not be their focus and sole goal. Materialism, status, accolades are things that will be offered and many Christians will fall if they are not grounded spiritually. Now is the time to decide whether as a Christian you will stand for God.

For many years, I have been saying that the Western countries - including the Caribbean - have been taking their freedom of worship for granted. Anything that we don't place value on, we will lose.

Christians have allowed false doctrines to cause them to keep away from the political process. There is no such thing as separation of Church and State. When God was establishing civil government according to Romans 13: 1-7, He did not outline whether or not the politicians should/would be saved or unsaved. So unless Christians prepare themselves to serve in this capacity, then the fall is going to be greater. We need Christians with insight to rise in business, in the media and in politics, in the health and education sectors. The time has come for Christians to support each other.

Things are changing so rapidly that even in social media, they are now implementing something called 'community standards', so that if you speak against the pertinent issues of the day - those opposite to the Word and principles of God - then you are blocked. Meanwhile, live, open sexual activities are being plastered all over social media.