Former board member to head UDC 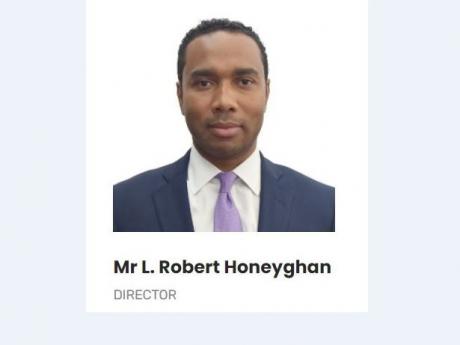 Honeyghan will take over from Heather Pinnock, a development executive, who resigned on October 31 last year. - Contributed photo.

L. Robert Honeyghan has been selected to be the new general manager of the Urban Development Corporation (UDC).

Honeyghan had been serving as a UDC board member since November 2020.

The job carried an annual basic salary of $9.2 million up to six years ago.

Honeyghan declined to comment on the news earlier this afternoon.

Up to September 2019, Honeyghan was the Community Relations Officer at the Jamaican embassy in Washington.

He has also been serving as deputy chairman of the Jamaica Special Economic Zone Authority.

Honeyghan will take over from Heather Pinnock, a development executive, who resigned on October 31 last year.

The UDC is Jamaica's main urban and rural development agency and manages billions in state assets including prime lands, beaches and parks.

The latest available annual report covering the financial year 2015-2016 shows the agency with assets of $50 billion.

The UDC falls under the Ministry of Economic Growth and Job Creation that is headed by Prime Minister Andrew Holness.

The agency has been under an audit by the Auditor General's Department for almost two years.