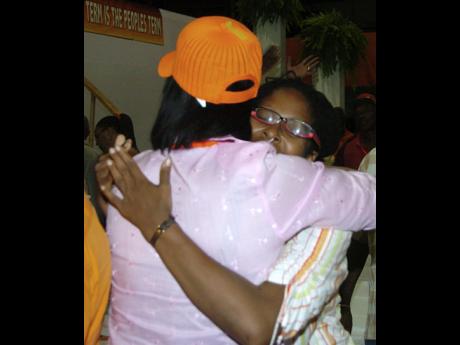 Junior Dowie
Former PNP president Portia Simpson Miller (left) give a big hug to Angela Brown Burke who has emerged the favourite to replace her in St Andrew South West. 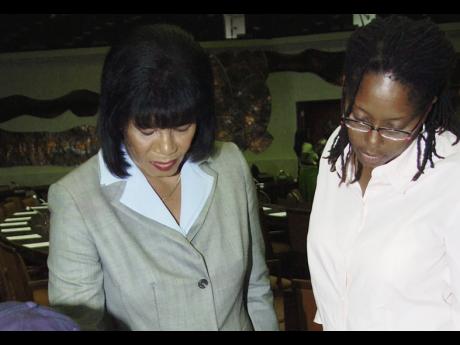 The People's National Party (PNP) seems set to select Angela Brown Burke as the replacement for Portia Simpson Miller as its representative in the St Andrew South West constituency.

PNP sources last week told The Sunday Gleaner that the way is almost paved for the sitting vice-president and former mayor of Kingston to be ushered into the seat.

"The former party president could resign as a member of parliament by early next month, and with the prime minister committing to an early by-election we are moving to settle the issue of a replacement as quickly as possible," a PNP source said late last week.

"Right now, it appears that Mrs Brown Burke will be ushered in but there is one major hurdle left to cross before an official announcement can be made," added the source.

While refusing to provide details on that major hurdle, the source hinted that there is some opposition to the decision from influential Comrades in the constituency.

"Portia is yet to indicate if she is endorsing Angela, and even though everyone know they have been close for years it will take the former Comrade Leader to smooth the way for the vice-president," added the source.

Efforts to get an official comment from members of the leadership of the PNP were unsuccessful last week, while Brown Burke was unavailable.

Simpson Miller stepped down as PNP president on April 2 to be replaced by Dr Peter Phillips, who also took on the mantle of Opposition leader.

But she remains on the Opposition front benches in Parliament, having stayed in the role as MP for the PNP garrison she has represented for some 40 years.