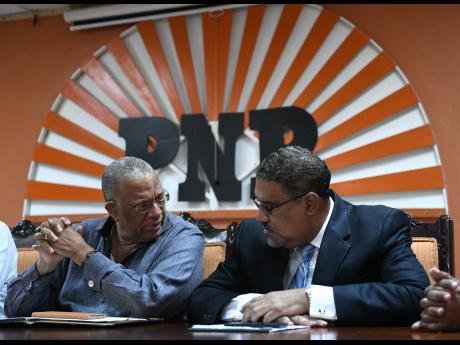 Ricardo Makyn
In this April 2018 photo, PNP President Dr Peter Phillips (left) at a media briefing with one of the party's vice-presidents, Dr Wykeham McNeill.

Smarting from the resignation of one of its councillors over breaches in the approval procedures at the Manchester Municipal Corporation, plus allegations that other members of the party are involved in a fraud probe now under way by the police, the leadership of the People's National Party (PNP) has called for full participation with the investigators.

In a release yesterday, the party said its president, Dr Peter Phillips, and his officers have taken note of the developments taking place at the municipal corporation.

"We acknowledge the allegations that have been made against a PNP councillor and staff members at the corporation. We note that the police are undertaking an investigation into the matter and we fully support that action.

"We also take note of various social-media postings with innuendos and slander against the party and some members of the party," said Phillips.

He said the PNP officers have concluded that based on the facts currently available to them, the innuendos and the defamatory comments against the party are not supported and cannot be justified.

"Consequently, the PNP urges all persons, including members of the corporation, and those making allegations and comments to fully cooperate with the police in their investigation," added Phillips

He said the PNP remains committed to transparency and to the highest standards of integrity, which have been the hallmark and tradition of the organisation.

"The party does not and will not condone or support any form of wrongdoing or illegal behaviour.

"We encourage the police to thoroughly and swiftly pursue their investigations and bring charges against anyone where there is sufficient supporting evidence. Let the chips fall where they may," said Phillips.

The PNP officers also urged members of the party who have been maligned by the comments in social and traditional media to take appropriate legal action to protect their reputations.

Last week, Deputy Mayor of Mandeville Ervin Facey resigned over the breaches at the corporation. Two employees of the municipal body also tendered their resignations amid calls for Mayor Donovan Mitchell to also resign.